Down the Eucla escarpment to the coastal plain, past the roadhouses added since our last trip in 1999, and up the Madura escarpment took hours. Stopping briefly at the escarpment lookout David took a photo replicating the one he took in 1979 (originally taken with his Olympus OM1 camera using slide film). He has used this teaching Classic Landscapes and Climates on PDCs over the last three decades. View south from the Madura escarpment

As we moved west the kangaroo carcasses on the roadside started to increase again after many hundreds of kilometres in SA where there had been few. Also, the extraordinary diversity and density of woody vegetation increased, including many species of mallee eucalypts.

Selecting a campsite between Cocklebiddy and Caiguna meant slowing down for each gentle limestone rise where there was more sheltering trees and finding a track navigable with The Blue. The spot we selected included a great variety of vehicle campsites to choose from. Once selected, David set about looking for larger bits of firewood. The dead mallee stem he harvested was some of the toughest wood he had even chopped or broken.

After another night by the fire writing this blog, we had our quickest fire, breakfast and pack up yet: one hour to attempt to get Norseman for our Zoom conference after 5 days with no phone or internet.

As we drove into the Great Western Woodlands, the density, variety and size of the tree increased including the spectacular coloured Gimlet Gums (E. salubris) and the majestic Salmon Gums (E. salmonophloia) some of the tallest growing trees of the Australian semi- arid zone. David had to be content with a few snaps from the car windows because of the kilometres to get to Norseman in time. In 1979 he remembers camping amongst the Gimlets with Venie as they travelled in her campervan from WA to build her new passive solar house on her bush property on the Far South Coast of NSW. A photo to match the memories, this one at camp near Coolgardie. Another species of Gimlet (probably E. campaspe which is endemic to the area)

The only stop this day was Balladonia Roadhouse for a tankful of fuel ($125 for 60lits) where David noted the place was a bit more upmarket that what was embedded in his memory from having spent 48hrs attempting to hitch a lift across the Nullarbor with a school friend in 1971 when they were both 16. He remembers attempting to let the abundant bush flies walk on his eyeballs without blinking as a meditation to pass the time and that they resorted to hitching both ways before getting the lift “over East.” The lack of lifts was not due to the paranoia and rarity of hitchhikers as one might expect these days, but a strategic mistake in accepting lifts beyond Coolgardie and certainly Norseman – consequently losing one’s place in the hitching queue of people heading east and west in those days of freewheeling faith in our fellow Australians.

We got into Norseman in time to touch base with Meg, Elke, Ostii and Beck, even though some had to be by phone after we lost the internet connection on the laptop.

Norseman was very tidy and relatively manicured compared to how David remembers it from the 1990s, let alone the 70s, but despite the signs of government-funded improvements, community resources and indigenous cultural presence, half the shops in the main street were empty. As elsewhere, the big roadhouse on the highway seemed to capture most of the dollars from the grey nomads, while plucky Asian immigrant families run businesses from some of the cheap real estate in the main street.

After a chai and a laptop recharge in a Thai café in the main street, a paid for hot shower for David from the tourist information centre, and a drive around the streets of Norseman nicely shaded by a great variety of flowering eucalypts, we headed north toward Kalgoorlie. We travelled past the mostly dry salt lakes to find a camp in the wonderful Great Western Woodlands. Our chosen site was lovely but not as spectacular as much of what we had passed in the more than 500 km travelled that day.

The car thermometer reading was 3 o C but without a drop of condensation after showers the previous day seemed incredible to us, used to more damp cold. After a slow pack up we did a short walk discovering the amazing specimens of Salmon Gums and abundant Quandongs (with small unripe fruit). Lyall has said there was lots of Quandong in the Great Western Woodlands but the sparse green fruit we saw would be sparse pickings for making fruit leather like we had been sucking on the journey from Melrose.

The journey past the mining town of Kambalda, created in the nickel mining boom of the 1960s, and on to Kalgoorlie was notable for the metallic trunks, eucalypts and the frequent private haul roads which were the source of three-trailer roadtrains carrying various mineral ores to the rail head. Passing a 74 wheeler road train with side discharging ore trailers

The looming spoil heaps of the Kalgoorlie Boulder Golden Mile appear as just another set of barren, if rectilinear, hills in various states of revegetation but the satellite view from Google Maps revealed the deep open cut and the scale of the mine matching the total area of the sprawling city of Kalgoorlie Boulder.

For a born and bred “sandgroper” who has crossed the Nullarbor four times, David had never been to the “golden city”, a place nevertheless etched into memory from school history about the fabulous gold rush of the 1890s and the pioneering pumped water pipeline. This was designed by engineer C.Y. O’Connor who suicided due to the stress about whether the pumps would fail to deliver the water the huge lift from Mundaring Weir 500km away in the Darling Ranges. Kalgoorlie was also the source of stories in the media about great pubs and brothels of the wild eastern goldfields and in more recent times about conflict between local aboriginal groups and police. One of the pubs of the gold rush era

Our superficial impressions of Kalgoorlie invited comparisons to our brief time in Broken Hill. The architecture of the magnificent post office with its gold leaf tower dome and the ornate pubs of Hannan Street match the heritage grandeur of some of Broken Hill’s grandest. But the number of empty shops seemed more and the sense of tension on the street between settler and indigenous culture felt stronger than in Broken Hill.

After an expensive drink and a long stay in a café for Wi-Fi access, inquires about sources of fresh vegies (let alone organic) other than supermarkets at a health food store revealed that a local members food co-op was the only source. Given we were just passing through, we consulted Lord Google about supermarkets other than Moles or Bullies and headed for the IGA in the apparently affluent new suburb of O’Conner. Su relaxed somewhat into a less agitated state than in Port Augusta to make some limited purchases of fresh veg, milk and even organic peanut butter. Perhaps what drove her to succumb to this ritual of normal Australian life was a craving for apples. The massive array of fresh food along with the mountains of processed and junk food reminded us how foreign our self-imposed limits to consumption were to the majority moving through the isles of apparent abundance. 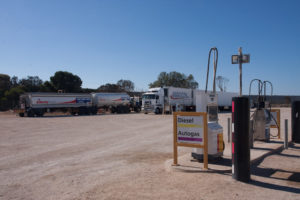 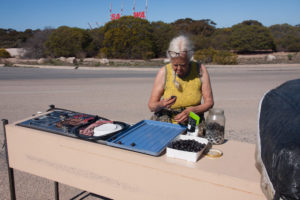 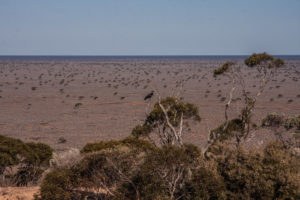 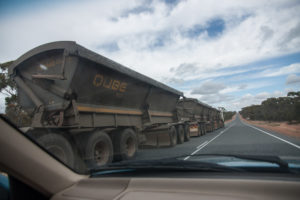 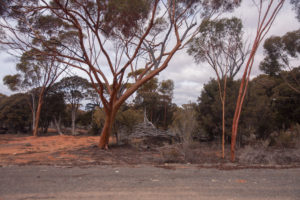 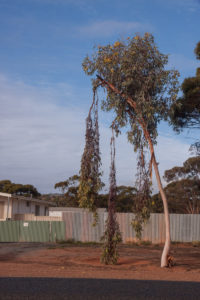 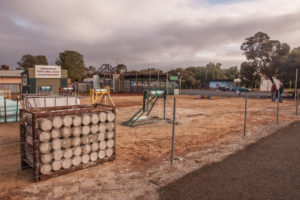 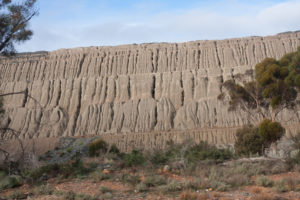 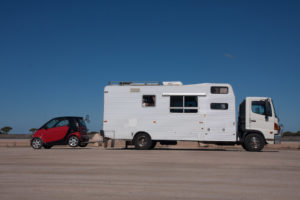 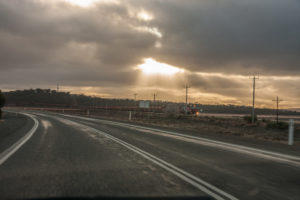 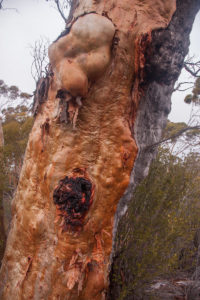 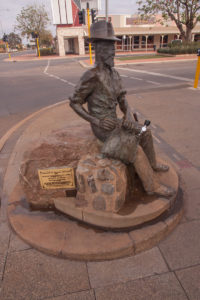 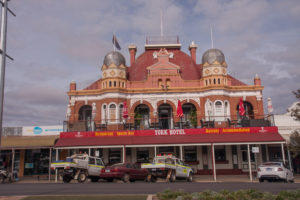