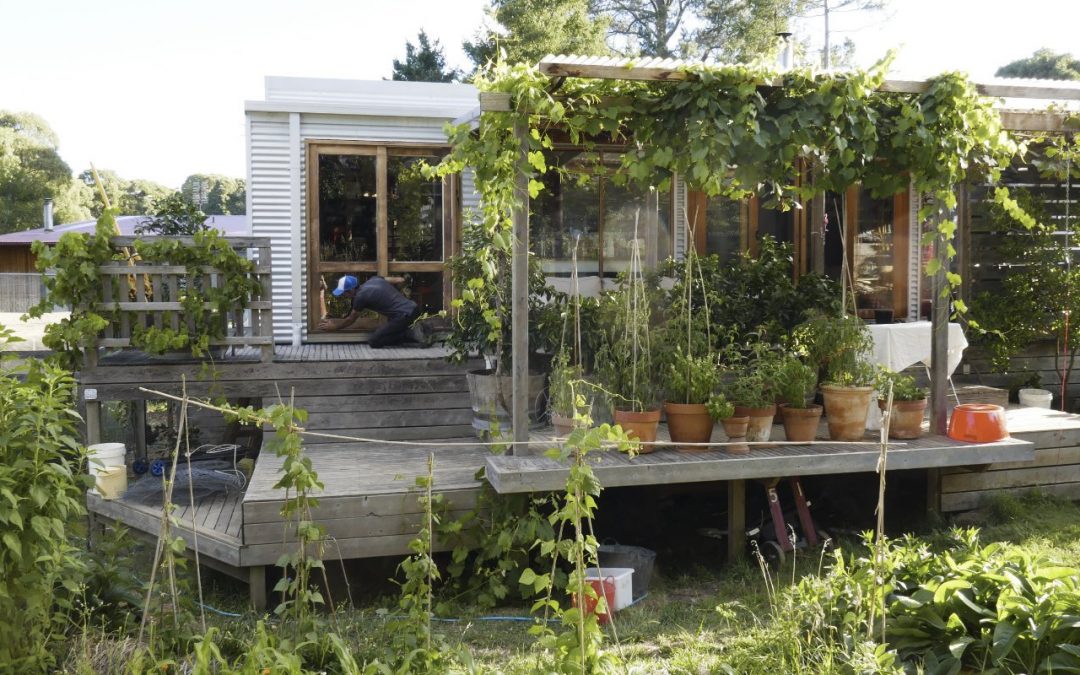 Our quarter-acre plot, which we call Tree Elbow sits on the edge of town, the Central Lake Reserve and the Wombat State Forest. When we moved here nearly a decade ago the vacant swampy block had only two trees: an oak to the north and a willow to the east. Land was expensive then for young people, but not entirely out of reach like it is now as the wealth divide has escalated during this time.

Over the years we have planted close to 150 fruit and nut trees, and many more on nearby public land. We have perennial and annual vegetable growing areas, a large chicken and duck run, and an anti-aviary containing almonds, hazelnuts and a Warré hive. We catch our own rainwater in a series of tanks and once it’s used, recycle it through our garden swales.

The main house is a small modern pre-fab that was constructed in a factory in Melbourne and brought up on a truck. It unfolded on hinges like origami and we moved in after a few flurried weeks of painting, laying floorboards, deck building, installing water tanks and a one-kilowatt solar system.

We would do it differently next time. Although the house is north facing, fully insulated, and the windows double glazed, the house lacks thermal mass. However, being on stumps on a sloping block has meant we could build an undercroft on the east side.

Using rocks unearthed from our vegetable beds we built the walls of a cellar. When our fridge dies we will not replace it. We are already transitioning to living without one.

As well as the main house, there are six other dwellings that dot Tree Elbow. There is the chook and duck house that provides shelter for 12 fowls. The Acorn is a double-storey tree house nestled around our oak tree from which is suspended a zip line that Woody, our four year-old, uses to travel to the main house when we call him and his friends in for dinner.

The Permie Love Shack, our Airbnb abode, is replete with two composting loos, (an internal sit-style commode for precious urine, an outside squat toilet for equally important humanure), and a shower room filled with warmer climate fruiting plants. The shower water hydrates our berry bank. There is the Cumquat, a small dwelling built by Zephyr, our 15 year-old and James, under the tutelage of Patrick. James came to us initially as a SWAP (Social Warming Artists and Permaculturists, our version of WWOOF). He came for a week then stayed for six more to be part of the build.

Zephyr, who was in year eight and struggling with the confines of a rigid school environment took six weeks out to learn to construct the tiny house – to collect materials by bike: from the tip, various skip bins around town and from friends’ sheds.

Then to work with the pre-loved materials and help shape them into a new story. The aim was for Patrick to mentor James and for James to mentor Zephyr, and to foster a sideways learning between the two young men, 14 years apart. Now the Cumquat is home to Connor and Marta, two permanent SWAPs who have been with us since the start of 2017. Connor answered our callout for a mentor to live with us for a year, to help Zeph navigate this tricky time of adolescence. Marta came from Poland as a week-long SWAP then she and Connor fell in love and have made our small neo-peasant compound their home.

We have another full-time SWAP too, Jeremy Yau, who did an informal apprenticeship with Patrick to build his own small garden dwelling: the Yause. It houses a futon mattress and a chest of drawers, and features a deck out the front with two citrus plants on either side.

Between the Yause and the Cumquat is a squat composting toilet for the SWAPs. The final small building on our block has had many incarnations. First it was a raised garden bed, then a double-storey cubby house, a composting toilet, a hot house, a pet cemetery (where we buried a neighbour’s cat that had been hit by a car), and now it is the Cookhouse: a four person wood fired sauna Patrick built out of local macrocarpa and insulated with sheep’s wool from the tip.

Every Friday night in the cooler months we fire it up and invite over family and friends. Everybody brings a dish to share and a towel if they wish to have a sweat. To ensure our permaculture communitarianism expands past the quarter-acre compound of Tree Elbow we organise various community projects and events. 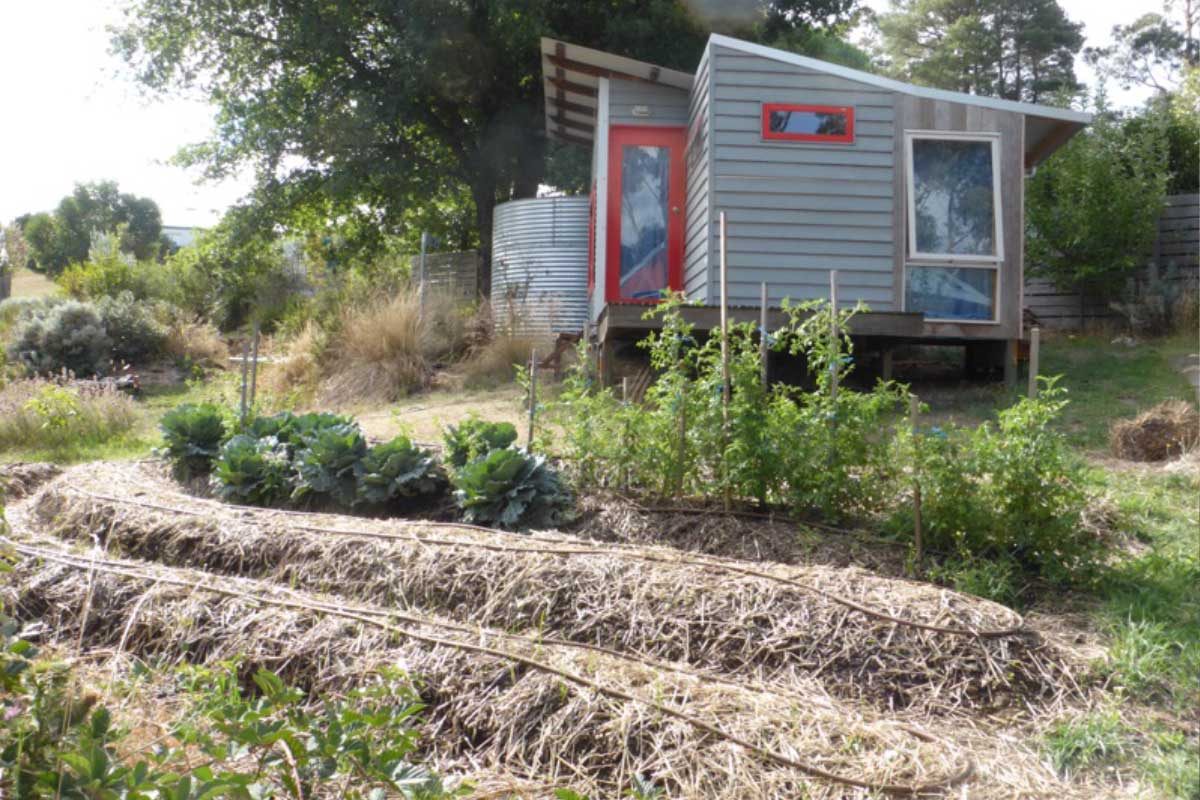 Meg initiated and runs Culture Club, a fermentation group that meets on the first Saturday of each month. She organises free workshops: cheese making, sourdough baking, cider and vinegar brewing. And she teams up with local growers who supply veggies for community making days: lacto-fermented pickles, kraut and kimchi. Patrick facilitates Daylesford Community Food Gardens. Apart from monthly working bees, composting and pruning workshops, he organises events such as the Bruce Pascoe and David Holmgren public meeting in our Town Hall in 2015.

The five community gardens in the town that we helped establish with friends around the time we went car-free are important sites for public food. The gardens were started either by guerrilla tactics of public land reclamation or through collaborative partnerships with the Neighbourhood and Health Centres.

The same goes for the extensive forest land to the south of our home. Over the years we have foraged 15 edible species of mushrooms there, blackberries, wild apples, hawthorn berries, rosehips, native cherry, elderflowers, countless edible weeds, and snared rabbits and gleaned fallen wood. We make sure we don’t over harvest this renewable resource so as not to interrupt the processes of decomposition required to keep the soil alive and giving. However, under-harvesting also causes a serious threat to the forest. Every several years the fuel load builds up to what the CFA, and other land authorities, deem unsafe for the town, and they set the forest on fire.

Each time this occurs, the ringtails (who have built their dreys in the hawthorns to protect them from powerful owls and foxes) and many other critters who have long made their home there are burnt out, the forest humus is once again destroyed and the soil put into a greater state of drying.

By harvesting the excess fuel, pruning out deadwood, chopping and dropping woody material into small, quickly decomposing parts and stomping down the dry, fire-prone blackberry canes (keeping this soil-stabilising plant as a groundcover so other species can push up through and eventually shade it out), we give to the forest.

Our activity helps to create an ecology that has plenty of humus-building material and thus water conserving properties for biodiversity to flourish while reducing the fire risk. This work is transformative as we go outside the typical limitations of anthropocentric modern life into a deeper realm of creaturely know how, plant wisdom and mycology, to be, in effect, in service of the forest that in turn keeps us warm and bears us fruit. 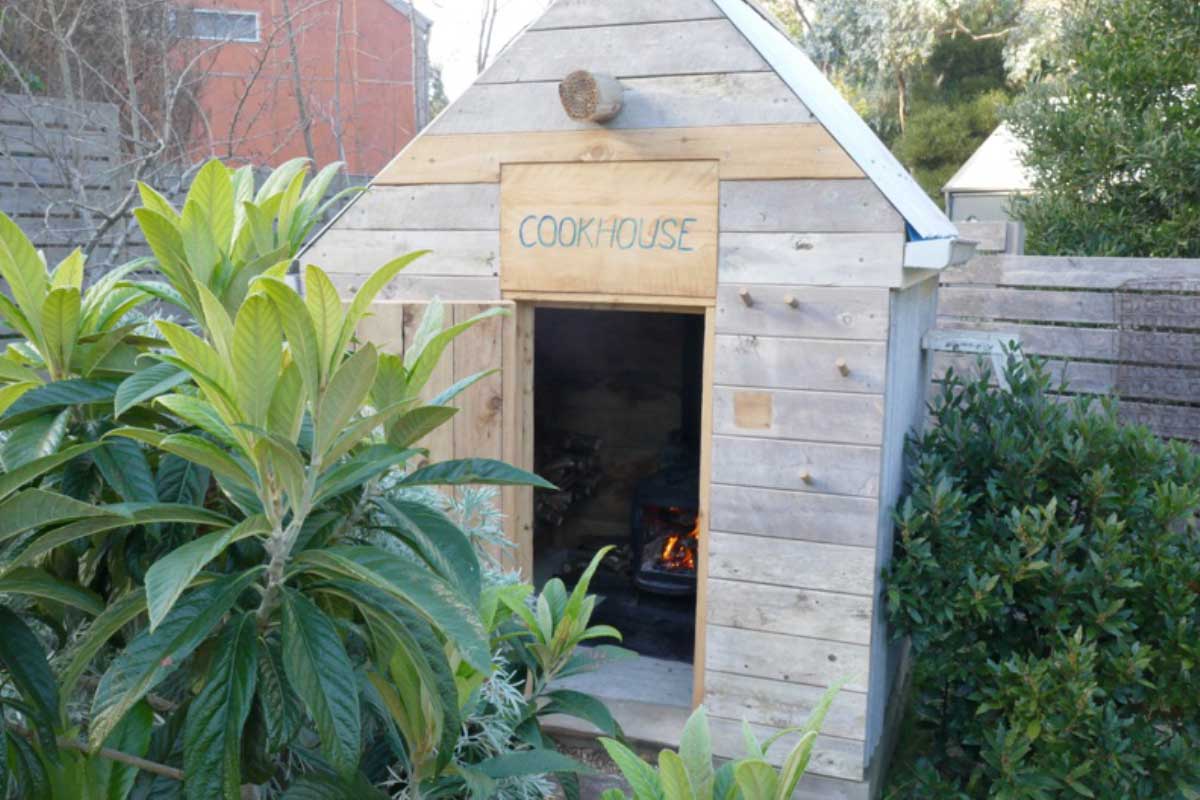 While this particular gift- giving and receiving economy of sacred proportions is specific to ours and our neighbours’ environment, these kinds of more-than-human relationships can occur in any homeplace.

We eat over 100 species of autonomously growing foods from our homeplace, our walked-for commons. We garden dozens of annual and perennial vegetables at home and in community. We grow, glean and forage fruit nine months of the year, bartering and swapping bounties with neighbours, friends, community gardeners and the broader community.

We butcher unwanted broilers and roadkill from around the town, and as a rule do not eat abattoir-killed meat. Most of the energy we use and the food we consume has an origin point that we know intimately.

When we eat meals together, with our children, SWAPs, friends and people who have come to learn our methodologies, we take in the life-giving nourishment of our loved locasphere and with it in our bellies help establish the grounds for recreating ecological culture. 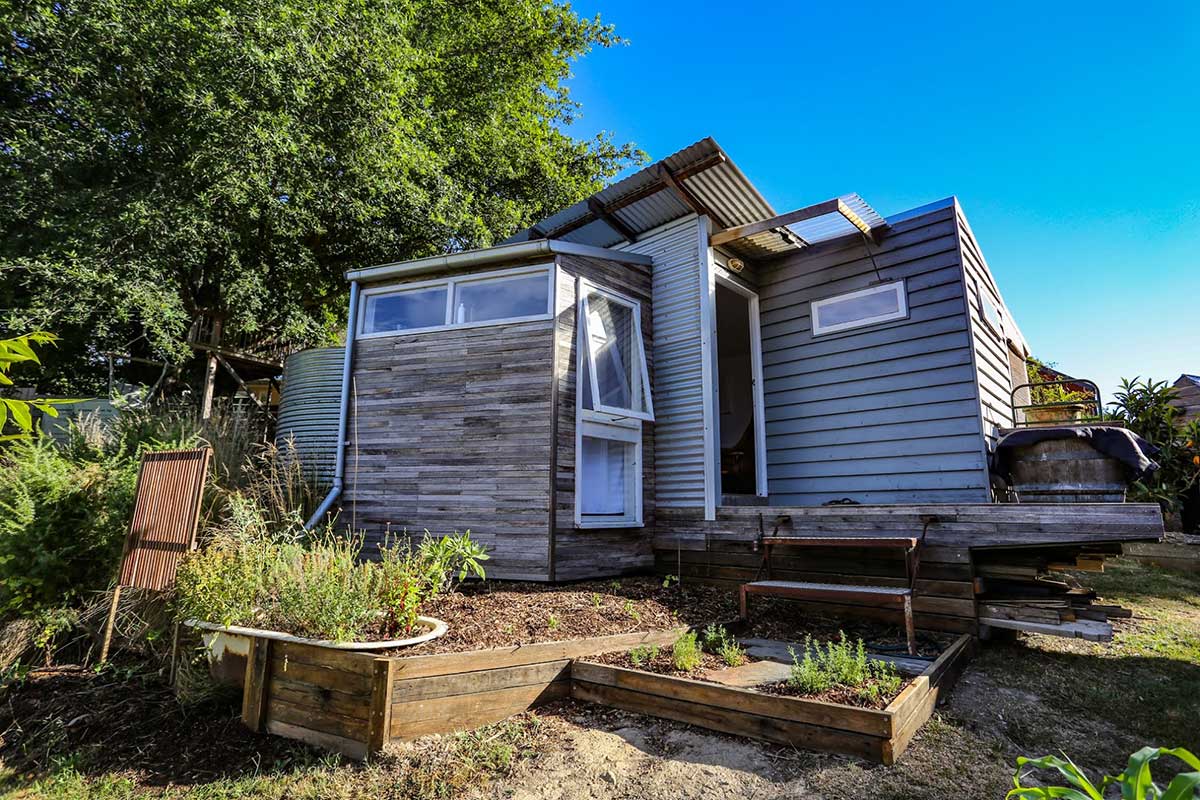 The dominant economic system can only be composted by critically observing where its harm derives – cars, supermarkets, indulgence tourism etc. Turning our backs on an irresponsible economy, one household at a time, means making some big decisions. This takes courage, will and a whole load of hard work. While the way we live is just one response to the predicament of the times, culture change can only occur if households and communities begin to map out their own place-specific plans to disentangle themselves from the drudgery, barging, guilt, stimulants, tricks, glitz, infotainment and mass destruction of cultural capitalism.

In whatever form this occurs, an abiding, tangible relationship with one’s local land (be this a farm, forest, suburb or industrial wasteland) and the continued or repatriated flowering of it must be at the heart. In other words our central ideology must shift from total extraction to songful regeneration. This, at least, is what we have learned over a decade of deliberate transition. It’s the details that matter, and the flowering earth of your loved homeplace will show you the way. 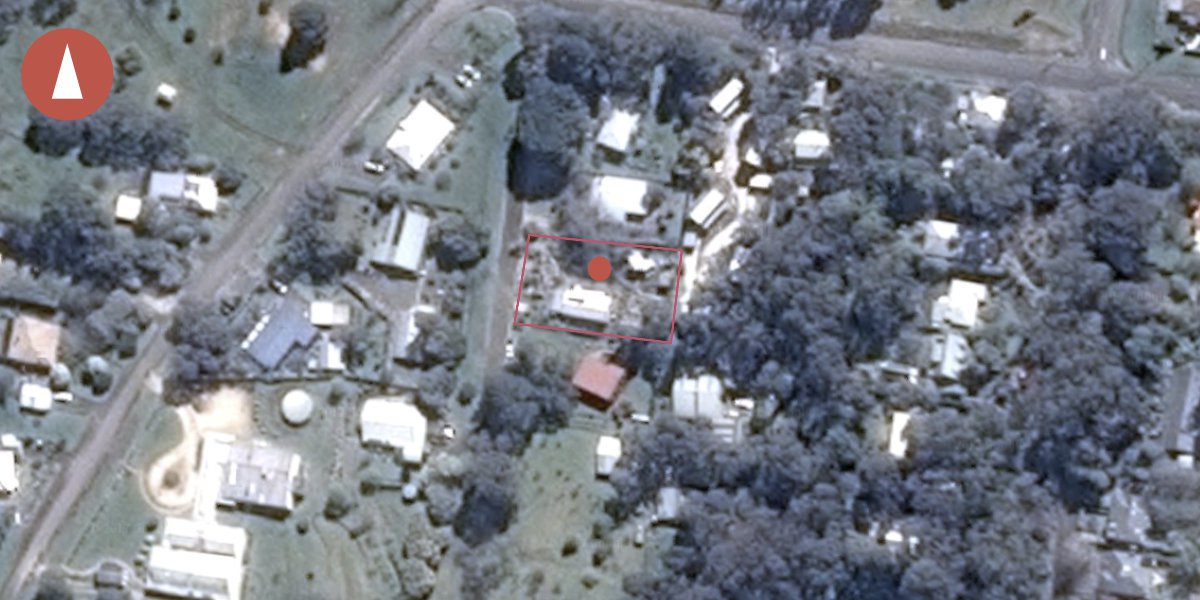 Marta and I first met in Daylesford in 2017. We were “SWAPs” with the incredibly inspiring “Artist as Family” and quickly grew in love with each other, this region and the beautiful people who inhabit it. We returned about a year and a half later, married and pregnant. Despite having...

Goshen & Katrina were looking for a small family home within walking distance to schools, transport and shops. In 2008 they found a renovated, 1950’s brick-veneer home on 1,000m² of land only 3 minutes walk from the high street.

Eco-Flat Brisbane is a one-bedroom apartment that is slowly being retrofitted to support a low cost, contented way of living. Our intention was to have no mortgage or other debts, free of car ownership and living as lightly as possible.

Just what is it? It’s an alternative infill development, an urban farm, a demonstration sustainable house, an educational opportunity, a community hub and most importantly – a benevolent dictatorship! We bought our new home at 16 Livingstone Street in April 2013. The 1970’s Italianate house sits on a quarter acre...