In May 2008 Richard Telford was looking for a cheap property, close to the intentional community where he was living with his partner Kunie and Kai, their 8 month old son, to set up as a demonstration site for urban permaculture living. It was envisaged that the property would become a home for his mother and her partner.

A small run down house was passed in at auction, and purchased for AU$53,000. With a laneway running up it’s south-east boundary, creek across the road to the south and railway easement not far to the west, there was plenty of pubic land nearby for expanding beyond the boundaries. It’s location was convenient to services, just 1km to central Seymour and a 1¼ hour train trip to the city running every hour or two. 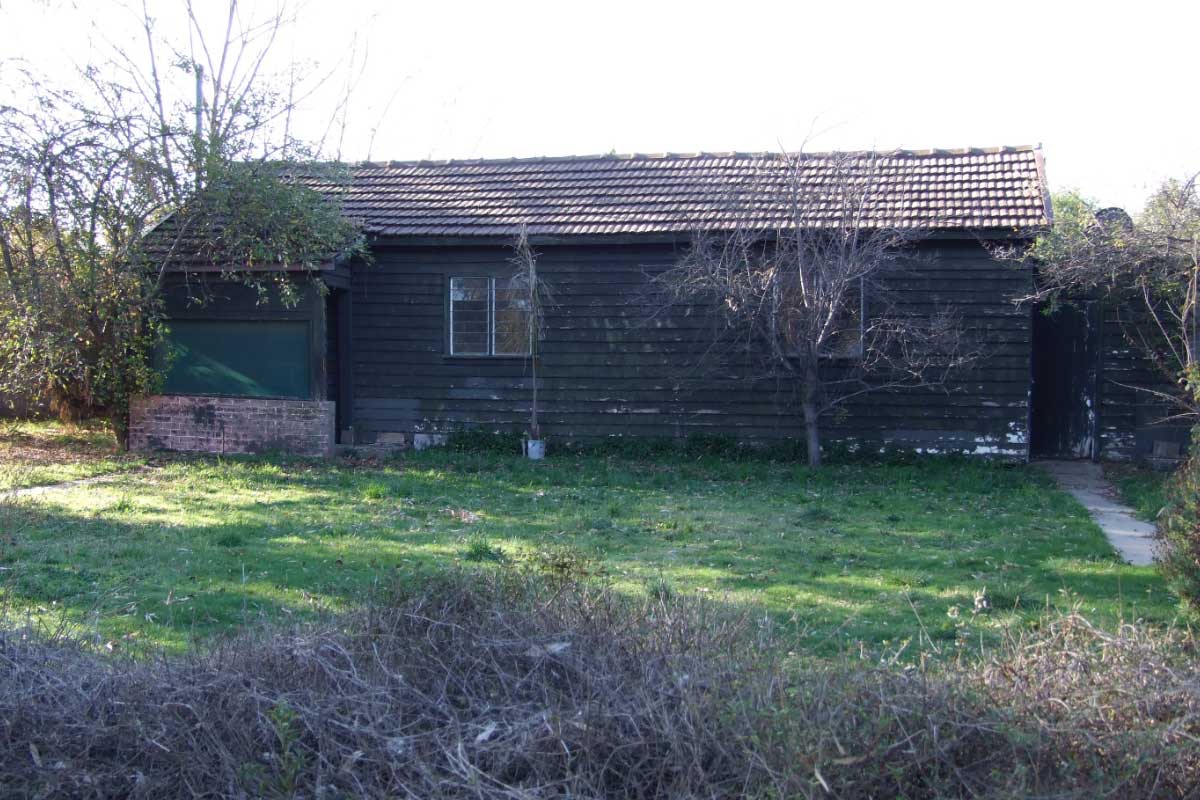 Working with local builder / architect Peter Lockyer on the AU$100,000 owner build project, the first year was spent developing plans and preparing the site. A large Red Gum was felled, milled and stacked for drying. This provided a safe area to build, sunlight and materials for the future decks, bench tops and bush poles used around the house, along with firewood to last several years.

The plan was to relocate and restump the original house on-site, but with termite damage and poor build quality it was determined that it was beyond repair.

The house was carefully deconstructed, floorboards reused, weatherboards cleaned and reused for wall lining, hardwood framing for the sub-floor and shelving, cement sheet in the bathroom and around the raised slab, tiles around garden beds and louvre windows in the greenhouse. Old concrete paths were reset as crazy paving. Just about everything found a new use.

Recycled bricks, hardwood floorboards, windows and doors were acquired, with new material used in the framing, cladding and for insulation.

The new design was orientated to face north for passive solar design and raised on stumps to 450mm above ground level, because of the urban flood zone. The original three rooms from the old house were incorporated as the new bedrooms along the south, with the living and dining rooms set on an 30m² insulated raised concrete slab with large north facing windows next to the kitchen. The bathroom on the north east corner incorporates a greenhouse, which can vent heat into the bathroom or kitchen during sunny winter days. Access to the toilet system is via the greenhouse where it is composted nearby, so it is not taken through the house. The old laundry and toilet have been retained for use as a workshop.

During the building process Richard and Kunie discovered their second child was on the way, so a decision was made to move into the new home as soon as possible to prepare for the home birth. Sen was born two weeks after the move, in June 2010, about 1 year after the building commenced.

One of the unusual features of the house is the cellar, located underneath a 8000lt water tank in the carport on the east side of the house. The brick circular cellar is sunk about 1.4m underground, and has a 10m long, 400mm diameter air vent leading from the cellar floor to a cool cupboard in the kitchen. A 1.6m, 300mm diameter black metal flue with whirlygig helps to draw the air, to help maintain relatively cool cupboard temperatures. In the cooler times of year, cold air is drawn in from under the house and the main vent is closed off. 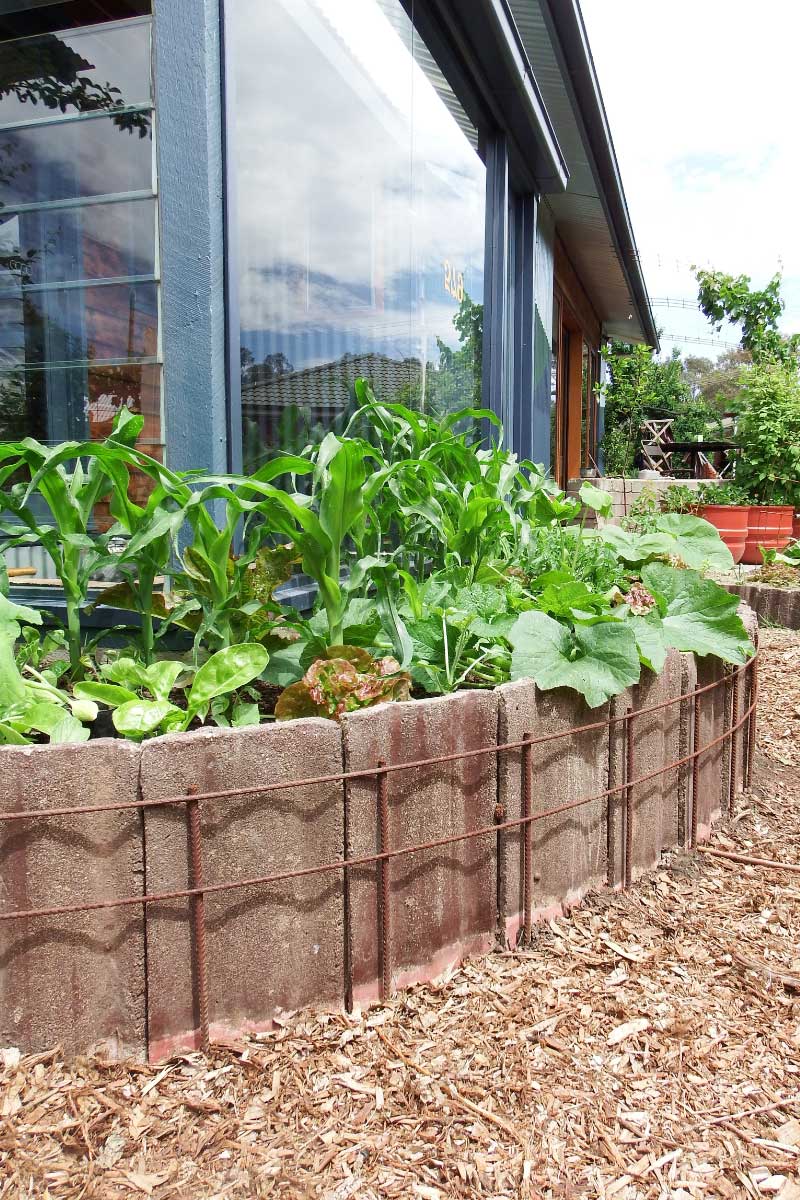 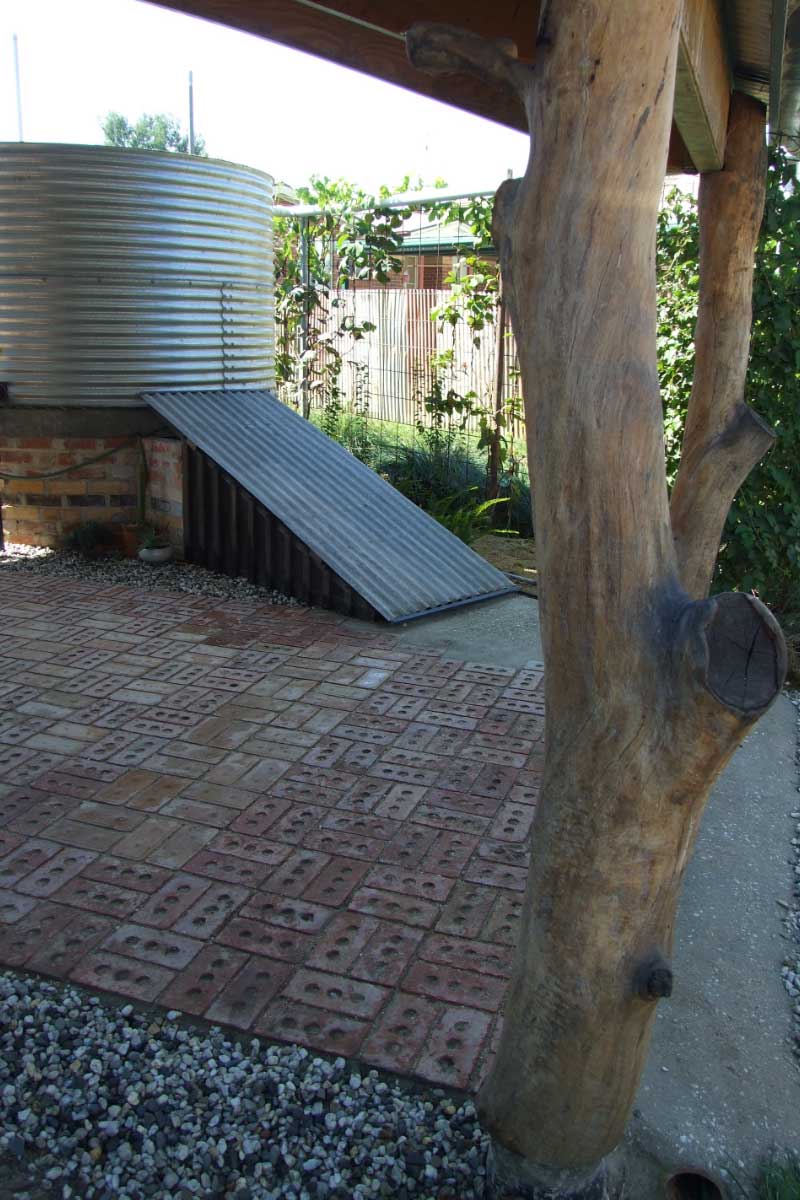 While the house is connected to mains water, the family elect to use rainwater for household use. Two corrugated iron water tanks with a pressure pump are adequate for their household needs, with left over available for irrigation. Mains water is used for irrigation during summer.

Both Richard and Kunie work from home, and both boys attend the local public school for two days a week in 2016, learning predominantly from home. Results from the school have been above average and the boys are confident and more than willing to express their opinions about how they see the world.

Telegraph and permacultureprinciples.com(2014 – 2015) and Pip Magazine (#7 in 2017). An extensive blog about their journey and building process is available at abdallahhouse.com 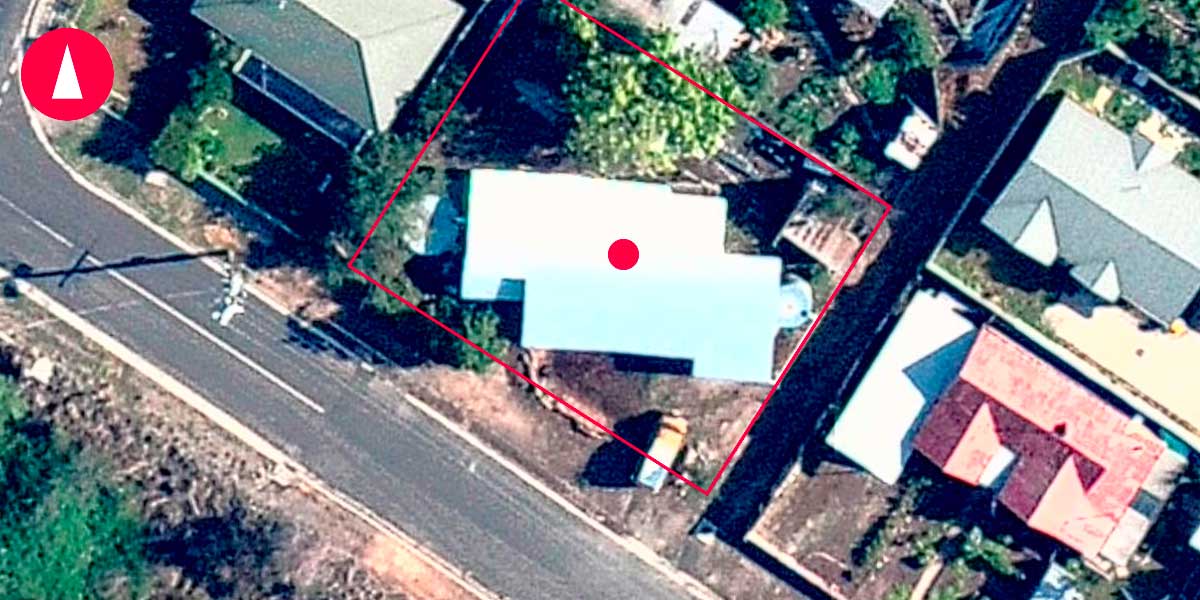 Salad greens and fruit picked and eaten in-situ not included. Click on tab at base of table to switch between years.

In early 2014, we relocated to Lilydale, Victoria from south-east Queensland to pursue new work opportunities. Our plan was to stay for around three years and use this period of settlement to learn to grow food.

Our property is the result of a much longed for home. We were living in Melbourne for some years (me working for Cultivating Community and Anton working for the Alternative Technology Assoc.) and

In June 2010 Dani and Nelson Lebo were looking for a ‘do-up’ property to demonstrate that ‘eco-homes’ aren’t only the domain of the wealthy, and that a sustainable lifestyle can be within reach of almost anyone. The Eco Thrifty Renovation project would be both their home and a ‘classroom’ for...

Goshen & Katrina were looking for a small family home within walking distance to schools, transport and shops. In 2008 they found a renovated, 1950’s brick-veneer home on 1,000m² of land only 3 minutes walk from the high street.