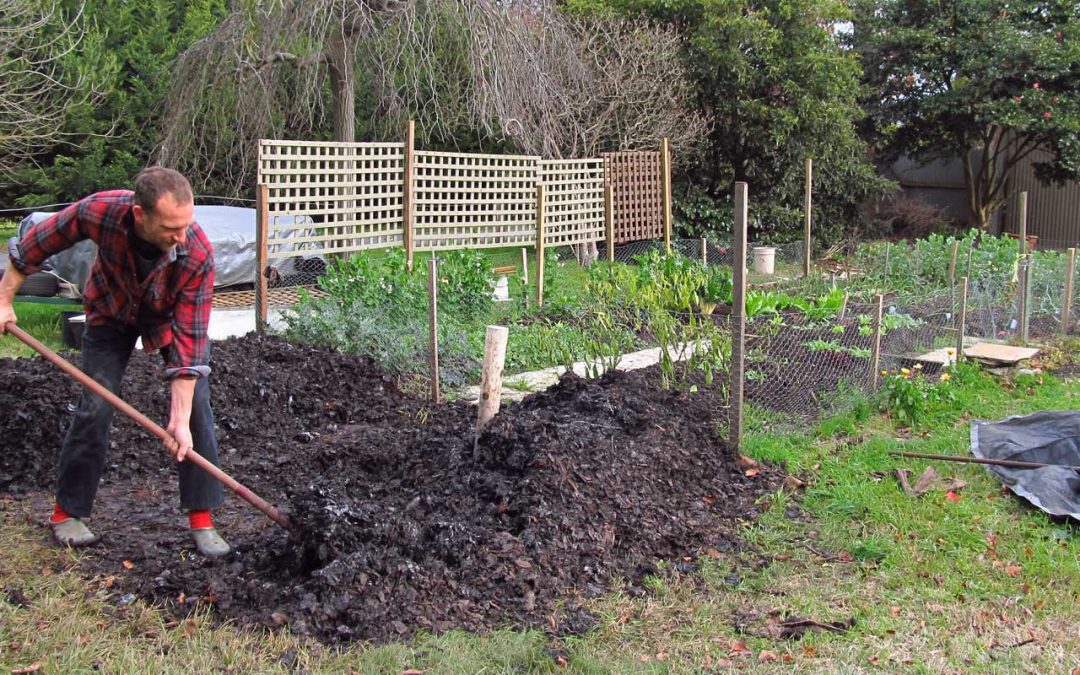 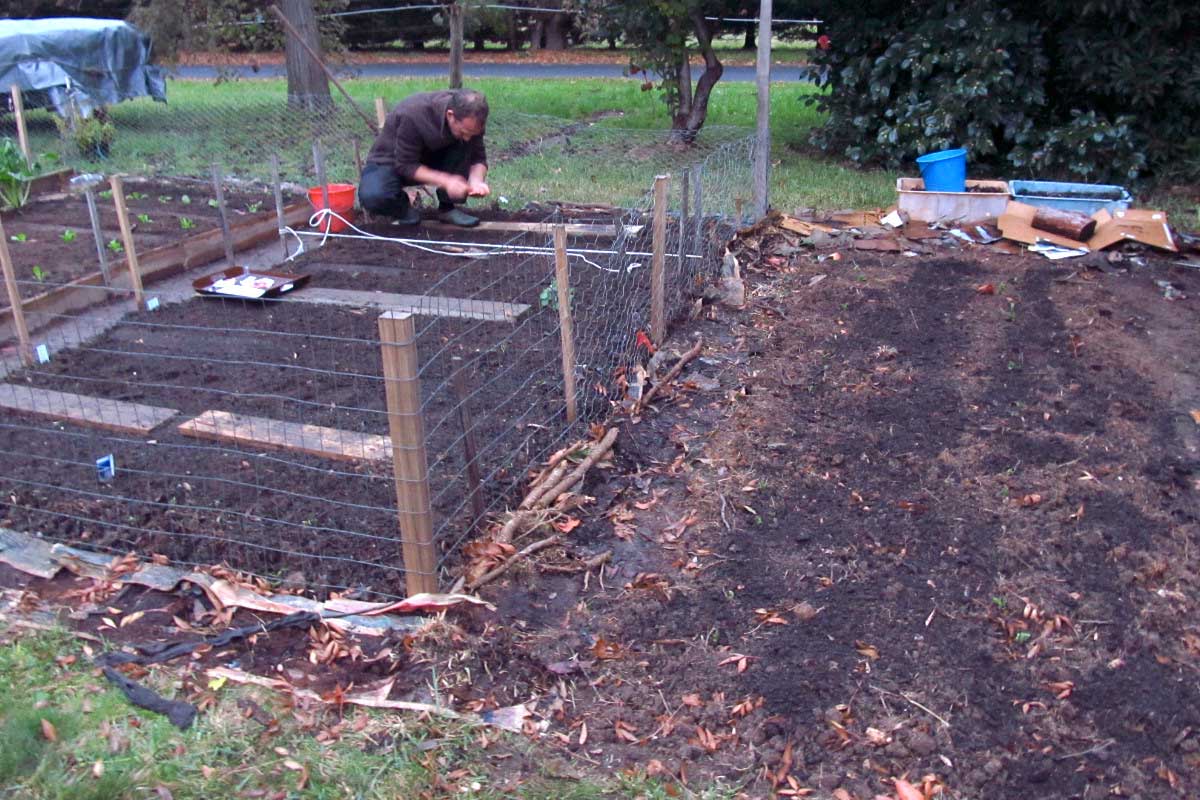 In early 2014, we relocated to Lilydale, Victoria from south-east Queensland to pursue new work opportunities. Our plan was to stay for around three years and use this period of settlement to learn to grow food. We specifically looked for somewhere close enough to cycle or walk to work and without a manicured garden. We figured that if the owner had spent money buying turf, we would not be allowed to rip it out. So we found a rental property on the edge of town in an area with a mixture of lifestyle properties and suburban blocks, with an old farm house on approximately 1500m² of ex-apple orchard land.

The grounds were reasonably run-down, but with plenty of sunny areas. Our landlord Joe raised no objections when we showed him our first garden bed. Being of Italian heritage, he understood home food gardening, but wanted to be consulted about pruning, especially after Matt radically cut back a large Desert Oak shading the main garden bed. Joe absolutely wouldn’t allow us chickens, and his regular unscheduled visits ruled out the option of using a bucket composting toilet system. Nevertheless, we managed to develop an extensive vegetable garden without problems. 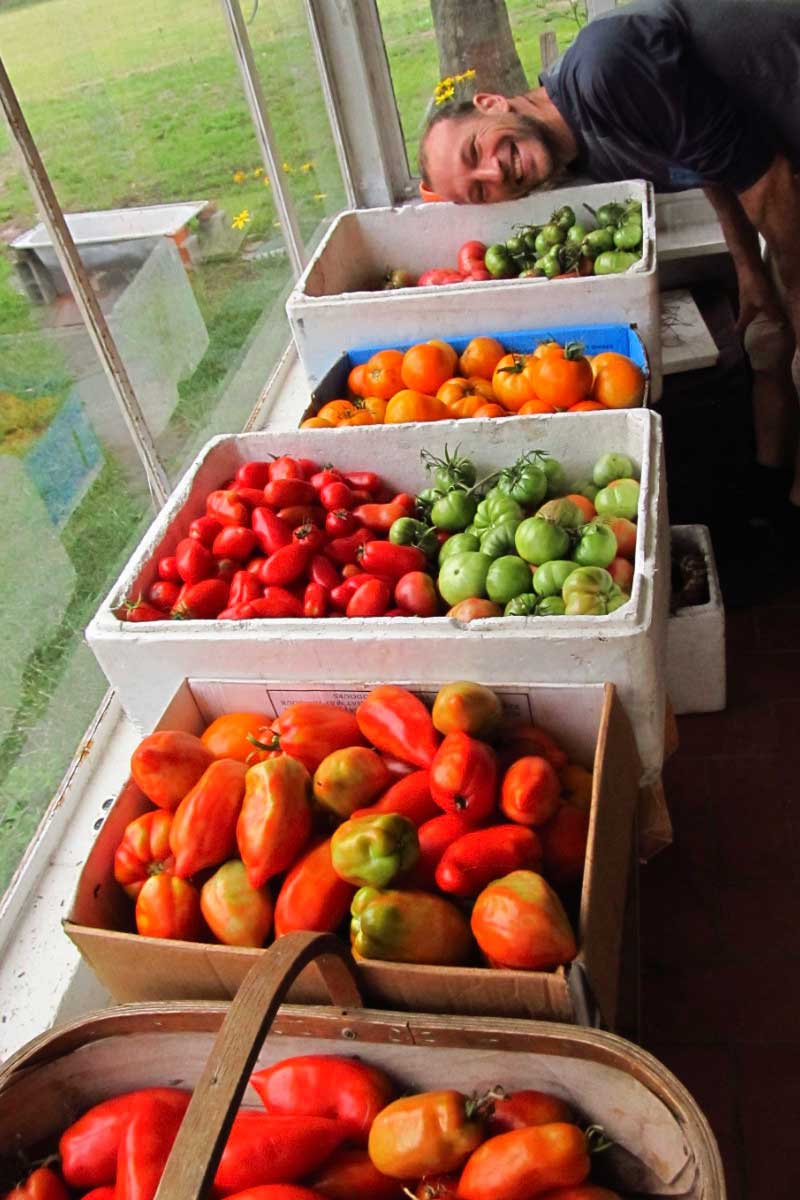 It was winter 2014 by the time we established our first small garden bed, double dug and planted out to broad beans, a favourite cultural food of Saba’s.

This bed was expanded for a summer garden, and by winter 2015 we had around 70m² of productive vegetable beds, including a greenhouse made from reinforcing mesh and horticultural plastic offcuts.

Nearly all the garden infrastructure like fence wire, posts and trellises, was sourced from local hard-rubbish piles, as was around 80% of our home furniture, supplemented by the abundant op-shops of Lilydale.

We set up a drip irrigation system (purchased new for around $200) to cope with the hot Victorian summer.

To convert lawns to gardens, we constructed hot compost piles on the boundary of the existing garden.

In this way the beds progressively lengthened, being enriched by biological activity during the process.

After the underlying grass was quickly killed by light exclusion and heat, we shovelled the dead turf onto the compost pile, roots soil and all.

All our food scraps went back to the garden, via the composts or worm-farms, plus around 80lt/week of coffee grounds collected from a local cafe.

Another major source of organic matter was the large number of deciduous trees on the property, from which we harvested leaf-drop for composts as well as deep accumulated leaf mold that went straight into the beds. We estimate we have spread around 8m³ of compost on the garden beds, from 8 hot compost piles. To make use of fallen branches and prunings, we occasionally produced bio-char in a 200lt steel drum. A fire was made in the drum until it was full of burning embers, then it was sealed with a tight-fitting lid, upended and the drum half-buried to exclude oxygen. The next morning the drum would be full of charcoal, which was easily pulverised with a sharp shovel and added to the hot compost pile to co-compost.

With our nutrition increasingly coming solely from our garden, we became interested in soil remineralisation. We realised that we needed detailed information on our soil nutrient balance in order to maintain our own personal nutrition.
Soil test results in spring 2015 showed a number of deficiencies, but a high cation exchange capacity and organic carbon content.

Using a method based on Steve Solomon’s ‘Intelligent Gardener’, we developed a complete organic fertiliser made out of organic soil amendments and minerals. In addition to this, regular applications of seaweed and activated compost tea helped boost plant growth.

While Matt had gardened at a fairly low-key level for several years, Saba had never grown anything before.

Nonetheless, a keen eye for detailed research and boundless enthusiasm meant that the garden was well-organised and productive. 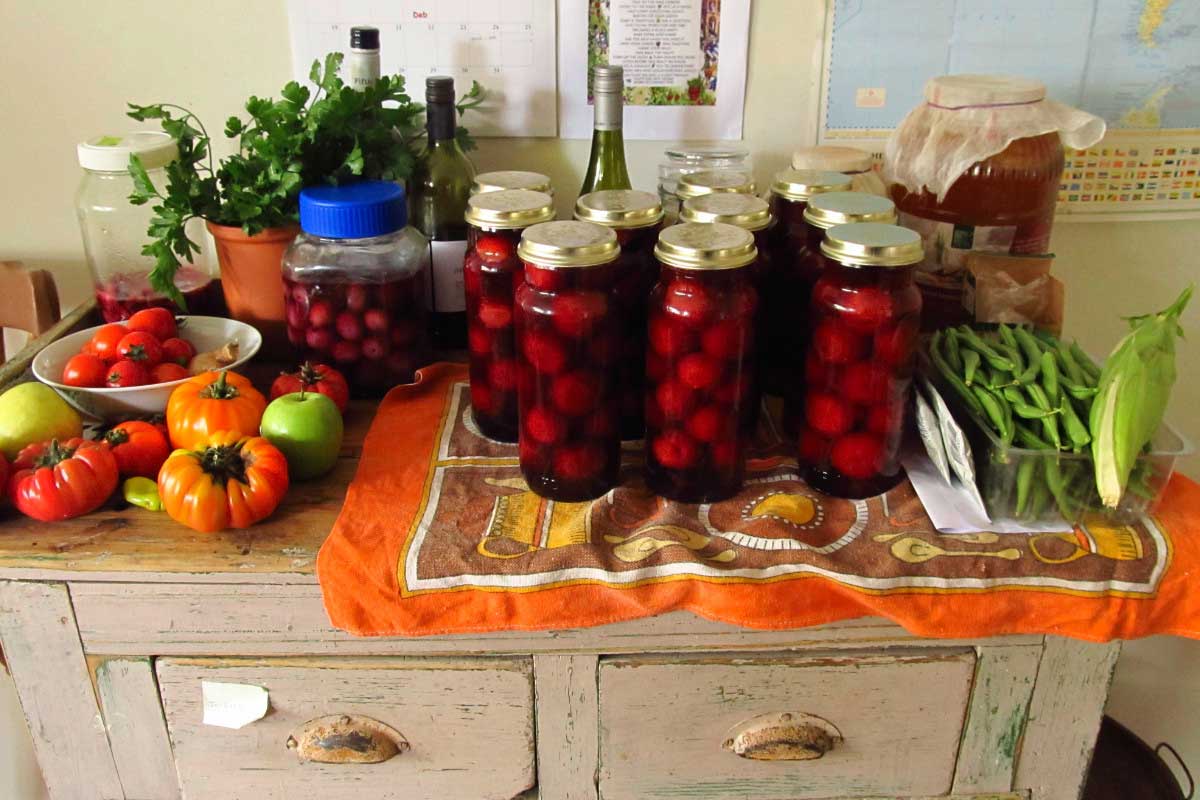 We developed planting schedules with the intention of avoiding seasonal gluts, yet who could have known that 6 cucumber plants could produce such volumes?

Careful planning, successional planting and constant preserving efforts meant that throughout the last winter, we ate abundant food from the garden, harvesting brassicas, carrots and salad every day plus our preserved surplus from summer – bottled, dried and pickled.
As our garden grew, our reliance on external sources of produce declined, to the point at which in January 2015 (8 months after the first broadbeans bed) we were only supplementing essentials that we failed to grow sufficient quantities of, such as onions and potatoes.

Otherwise we ate wholly from the garden, plus exchanges with neighbours, for the last year and a half. A certain stubbornness in refusing to buy out-of-season or shop-bought produce helped us focus on being creative with garden produce by using good seasonal recipes.

Initially we had great intentions of recording all the produce from the garden, but found recording each salad picking and daily basket too taxing. However, we tried to record our major fruiting crops such as tomatoes, beans and potatoes.

Our garden journal records a total of 208kg of heritage tomatoes from about 14 plants in summer 2015, which achieved our goal to be self-sufficient in tomatoes year-round with over 80 bottles of passata. 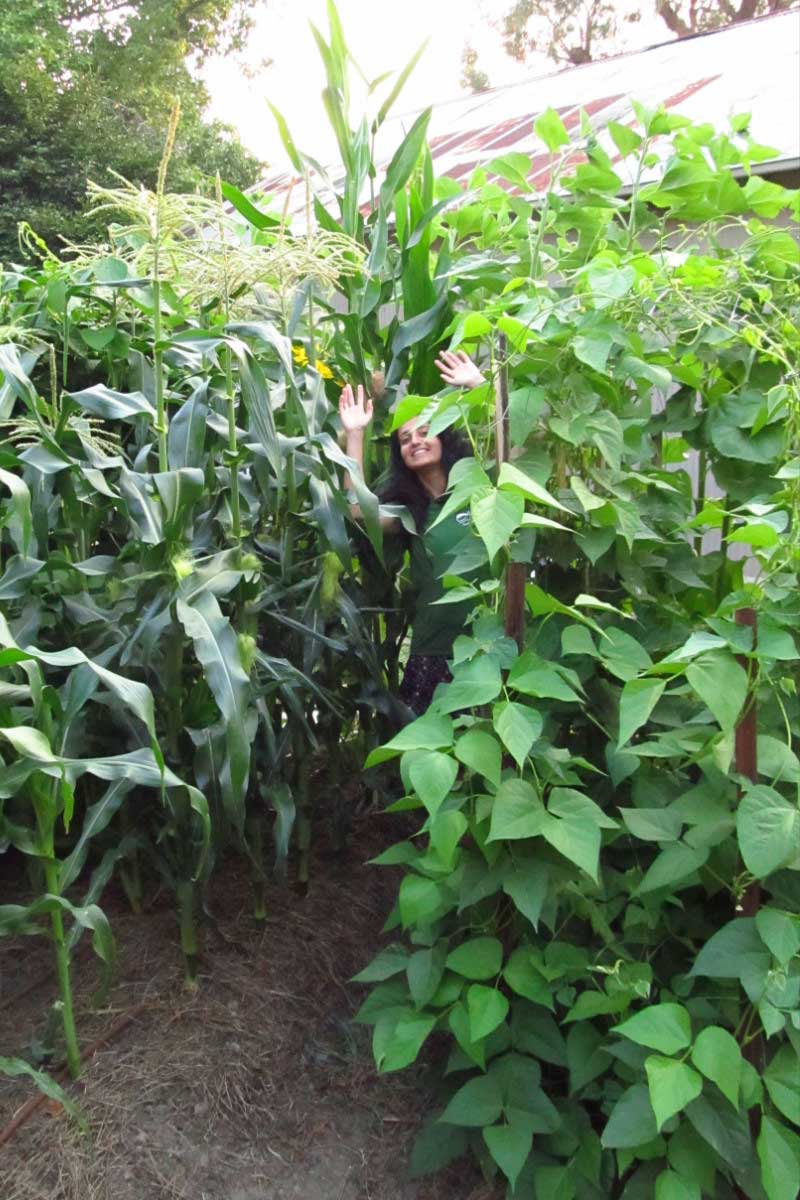 Our local social relationships were important in supporting our home-grown food supply, as well as support in bushfire season and day to day garden chores. The adjoining land is under a commercial strawberry crop, farmed by an elderly Italian couple. Benny and his wife Lydia virtually adopted us as their surrogate children and we shared many fine times talking about old-time simple living. On the other side of the field were Ruth and Neil, who are also keen food gardeners. While we don’t grow much fruit ourselves, we have always had an abundant supply, swapped for veges with our neighbours. Recently a local food swap started that provided another exchange possibility, and introduced us to a group of very active local growers.

Occasional fish, meat and milk supplies come from local Yarra Ranges suppliers as far as possible, and each week we bake sourdough bread using home-milled biodynamic Victorian grains. Our local permaculture group helped us establish local social relationships, giving us access to things like local organic goat milk from which we produce yoghurt and soft cheeses. And by selling surplus to work colleagues, a captive market in the lunch room, we have raised enough funds to buy a good supply of seeds. 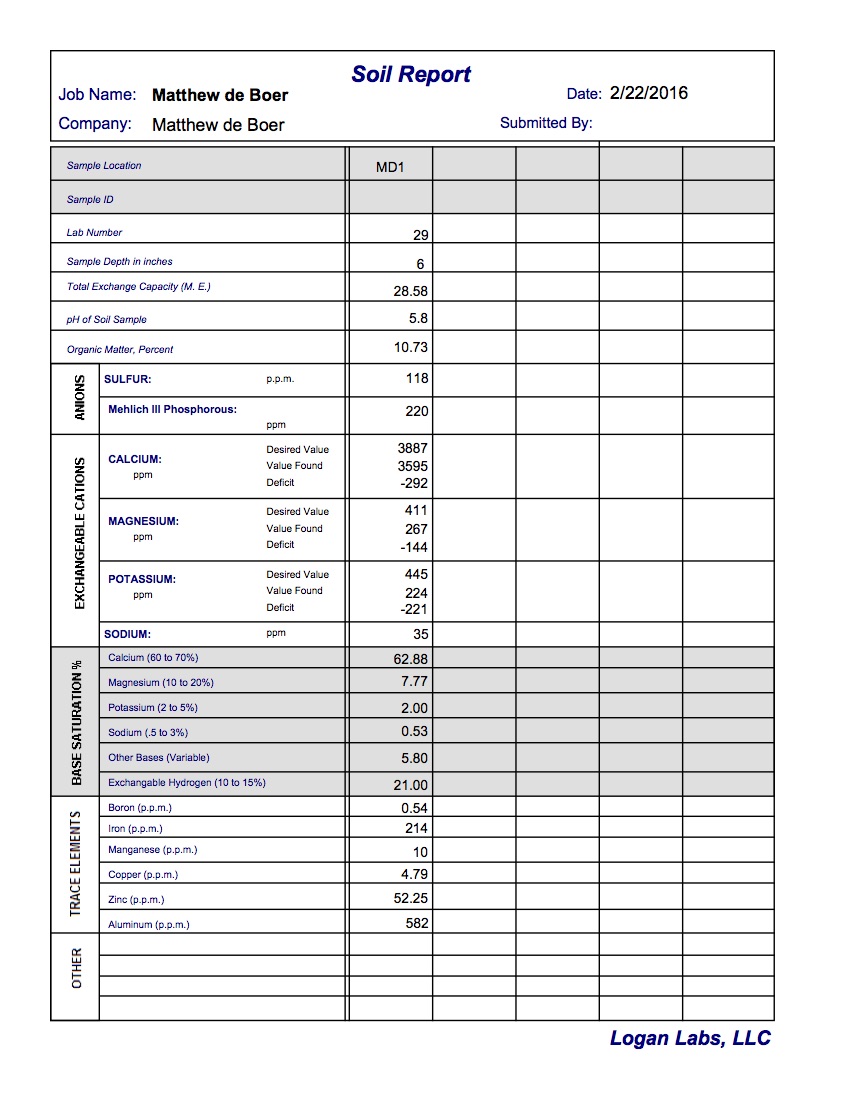 Our one regret is that we wished that we had planted a lemon tree as soon as we arrived at the house, as we could have been enjoying them already, and would have ensured a lemon supply for future tenants.
We did try growing other fruit trees – grafting onto a wild apple on the nature strip, grafting cherries onto ornamental cherry root suckers and berries – but only the red currants produced harvest thus far.

Presently our time has come to move on. While we are somewhat sad to be leveling the beds and replanting pasture grass, we are happy with the thought of a happy soil ecology existing below the surface.

Compared to the powdery white structureless soil left after next door’s strawberry crop was ploughed in, our soil is a lovely dark, rich, organic loam.

The lawn will be nutrient dense for the next tenants, just waiting to be dug up and replanted! 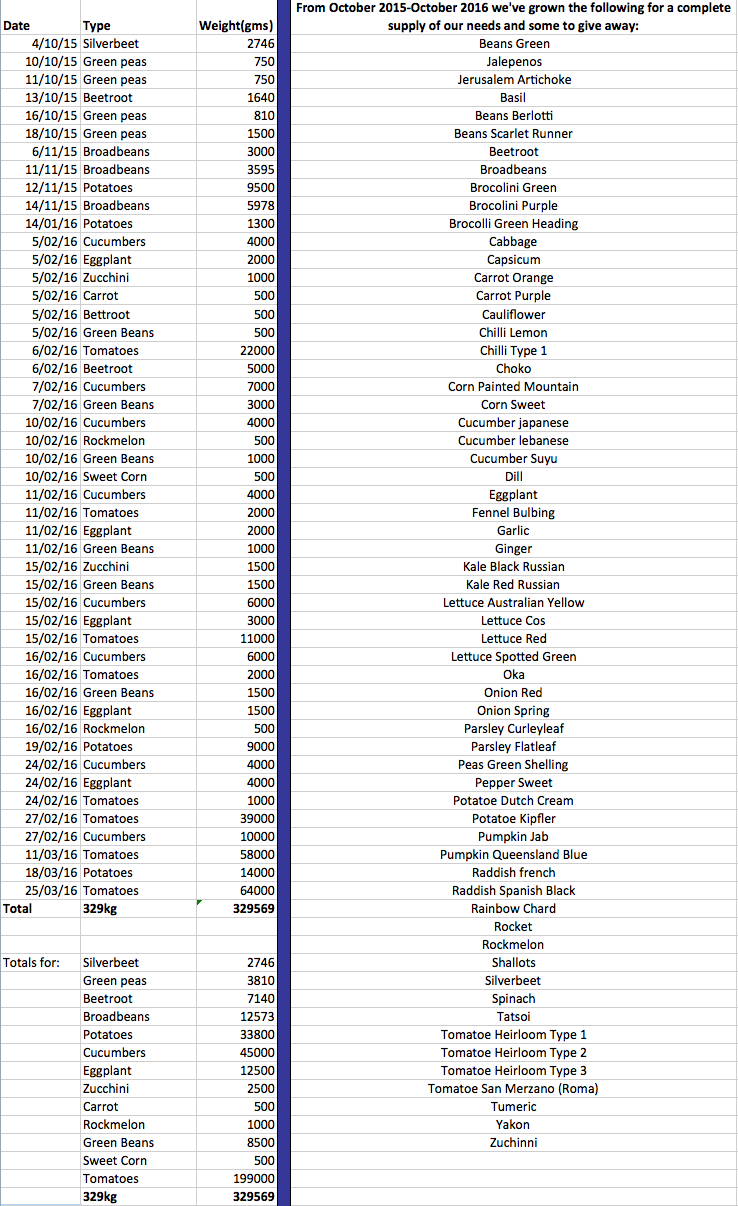 In 2000 Teresa and Jake were looking to relocate to Adelaide and they purchased an old bungalow in Bowden. Bowden is an inner city suburb approximately 3km from the GPO with interesting industrial and heritage influences.

Marta and I first met in Daylesford in 2017. We were “SWAPs” with the incredibly inspiring “Artist as Family” and quickly grew in love with each other, this region and the beautiful people who inhabit it. We returned about a year and a half later, married and pregnant. Despite having...

In May 2008 Richard Telford was looking for a cheap property, close to the intentional community where he was living with his partner Kunie and Kai, their 8 month old son, to set up as a demonstration site for urban permaculture living. It was envisaged that the property would become