In December 1998 Alistair Tuffnell bought a rundown workers cottage for $156,000. The cottage/house is extremely well located to all services. Alistair’s partner Christine Baro moved into the house in 2001.

For the next several years Alistair and Christine focused on paying off the mortgage on their home; they did very little renovation work during this time other than restumping and painting.

In 2012, after much WWOOFing and travelling to country areas, they decided to stay in the city and retrofit their inner city home.

They did it slowly in stages over three years so they could learn as they went, maintain flexibility to make changes as the retrofit evolved, and do the retrofitting as they saved money from their part-time work (to avoid going into debt).

In 2011, Christine and Alistair purchased a 1.5kW Grid interactive solar electricity system. With the generous feed-in tarriff, it was envisaged that the solar system would pay for itself after about 5 years of usage.

In 2013, experienced local carpenter/builder, Peter Sampsonidis, built the first half (the east part) of the northeast glasshouse/bathroom using recycled jarrah floorboards, louvred windows, and laminated glass for the roof.

Christine designed the glasshouse/bathroom inspired by ones she had seen from David Holmgren and Bill Mollison. 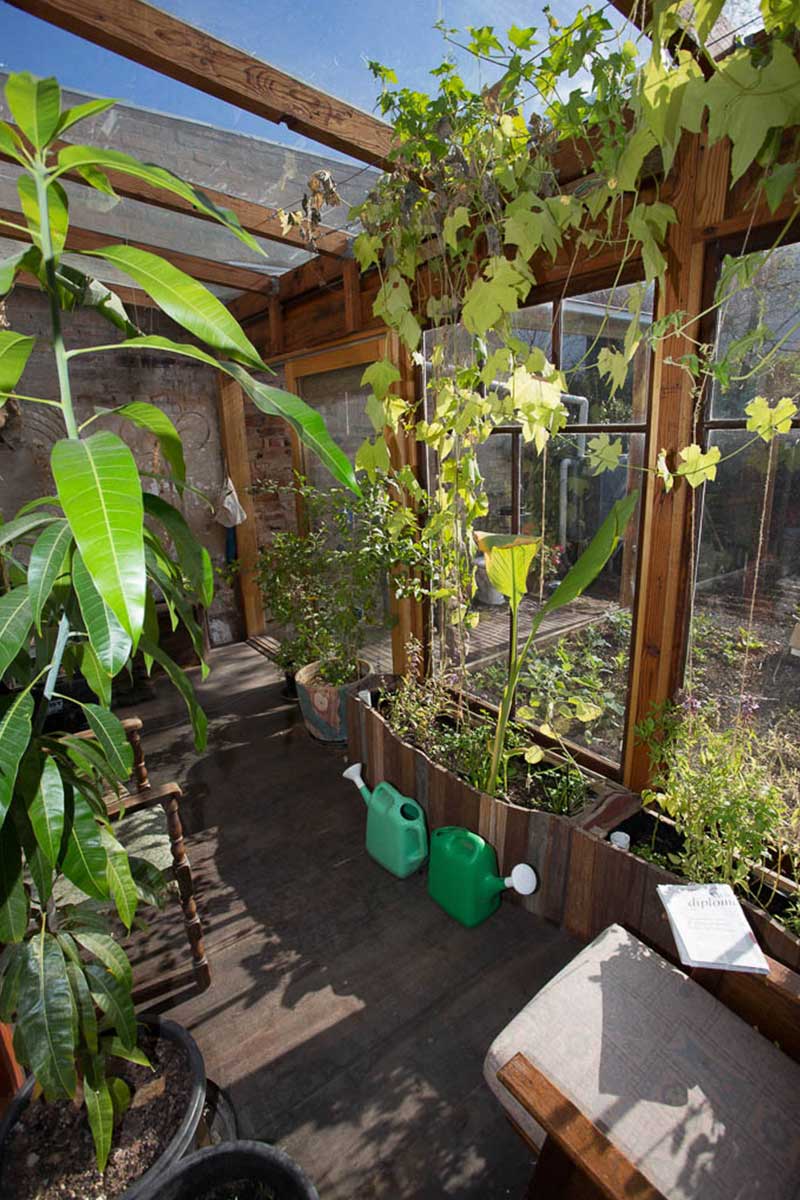 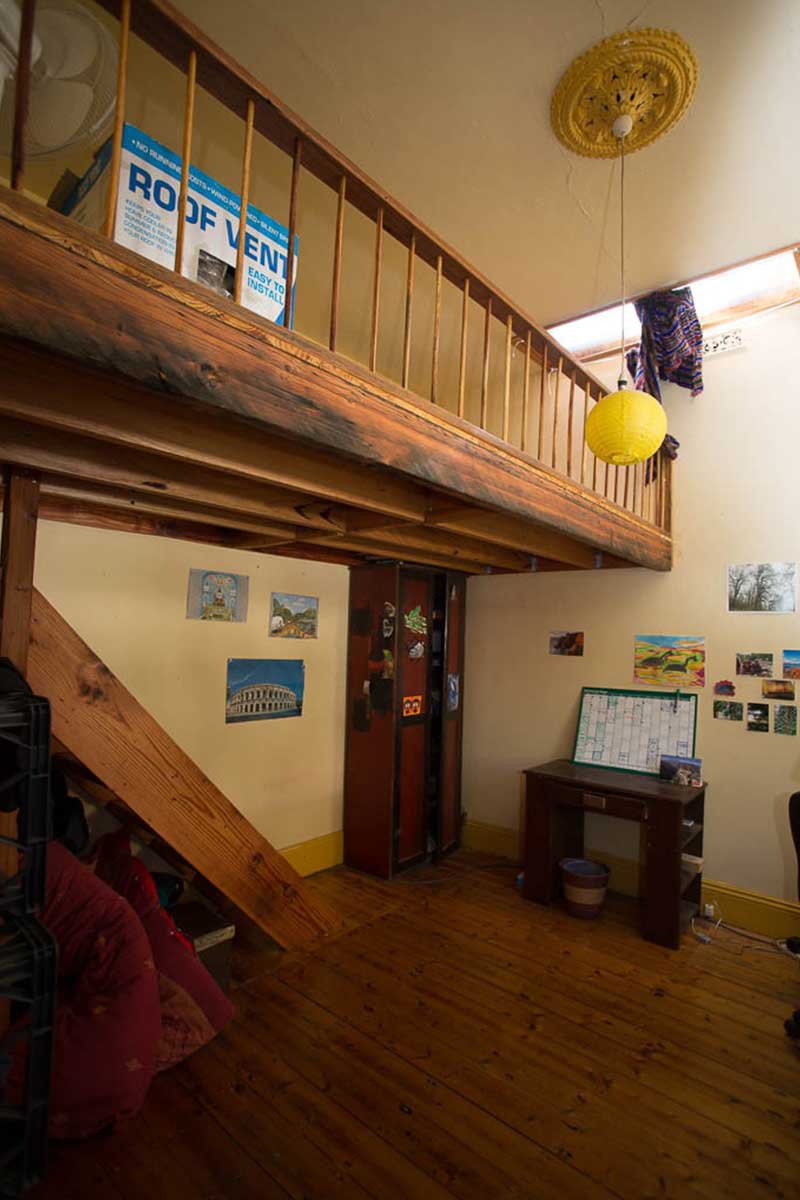 Christine envisaged making the house smaller and thus increasing the size of the north-facing garden, to grow more food.

The old galley kitchen and bathroom with toilet, shower and laundry would be removed to make space for more outside garden and the north-facing part of the glasshouse.

The new kitchen would be located in the original living room, along the east wall, on the other side of this wall would be the glasshouse with bathroom/laundry. Therefore the kitchen and the bathroom/laundry plumbing could be done along the same wall (on different sides). The toilet would be relocated outside (covered), looking into the garden.

At the end of 2013, Christine and Alistair (with no prior building experience) and some friends demolished the old kitchen and bathroom. Alistair salvaged a lot of high quality wood from local demolitions and bought second-hand wood and windows from recycled building stores.

Alistair and a friend put a sliding glass door and window in the north wall of the living room (which was now the end of the house). Another friend built a beautiful kitchen bench from Alistair’s salvaged wood. A local plumber, did the plumbing for the kitchen and bathroom and connected the gas for the stove/oven. 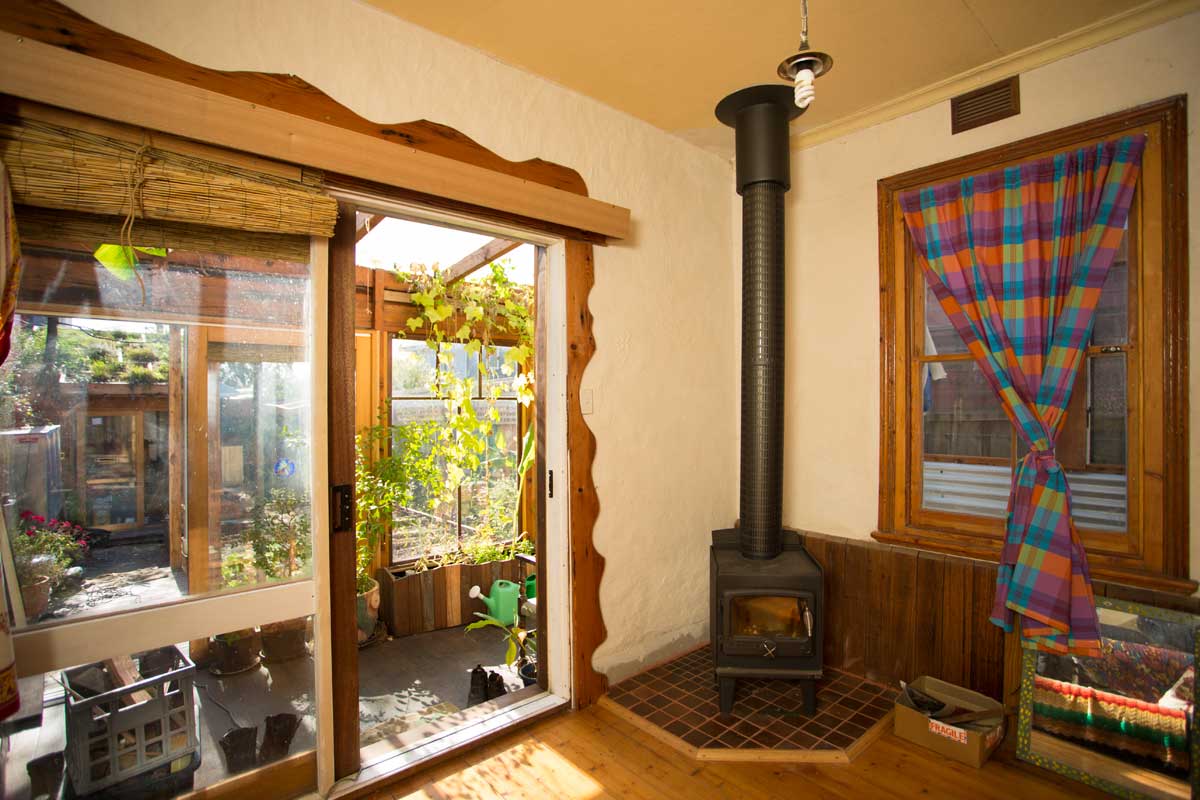 Christine and Alistair did as much of the retrofitting labour – such as rendering inside walls with clay, wood shavings and sand – as was reasonably possible. A local electrician installed a 170 litre (electric back up) solar hot water system. The mains gas was disconnected and a 45 kg gas bottle system was installed for the gas stove and oven.

In 2014, the second part of the glasshouse (north side) and a covered deck for the toilet was completed. This time Alistair

worked with Peter to do the building. Alistair enjoyed learning basic carpentry and Peter enjoyed the challenge of working on a creative retrofit, using salvaged wood and windows.

A Nectre 15 wood heater was installed for heating and it is regularly used (in winter) to slow cook on and for the kettle for cups of tea and the hot water bottle. Peter and Alistair constructed a small bungalow and tool shed – both with rooftop gardens, using much salvaged wood. The bungalow is being used for Christine to give Shiatsu treatments and it could be used in the future for a person to lodge in.

Christine and Alistair constructed 8 raised vegetable garden beds in an area of 18m², have 2 chooks and a few fruit trees. The glasshouse/bathroom/laundry is a lovely place to be on cool but sunny days, it is excellent to raise seedlings and extend growing seasons (turmeric, cucumbers, luffa, etc). Having a bath overlooking the vegetable garden, chooks and rooftop gardens is a simple luxury to be regularly enjoyed.

Christine and Alistair love their modest home which they and friends shared in making to their style. Much love, hard work and approximately $30,000 are the costs and rewards of their retrofitted home.

They are active members of the Northcote Community Gardens (within walking distance) where they grow vegetables, and fruit in the communal orchard. Alistair is currently growing garlic in the next door neighbour’s backyard. They have one car which is seldomly used, now that the retrofit is complete. Alistair and Christine regularly cycle to and from work.

Just what is it? It’s an alternative infill development, an urban farm, a demonstration sustainable house, an educational opportunity, a community hub and most importantly – a benevolent dictatorship! We bought our new home at 16 Livingstone Street in April 2013. The 1970’s Italianate house sits on a quarter acre...

In June 2010 Dani and Nelson Lebo were looking for a ‘do-up’ property to demonstrate that ‘eco-homes’ aren’t only the domain of the wealthy, and that a sustainable lifestyle can be within reach of almost anyone. The Eco Thrifty Renovation project would be both their home and a ‘classroom’ for... 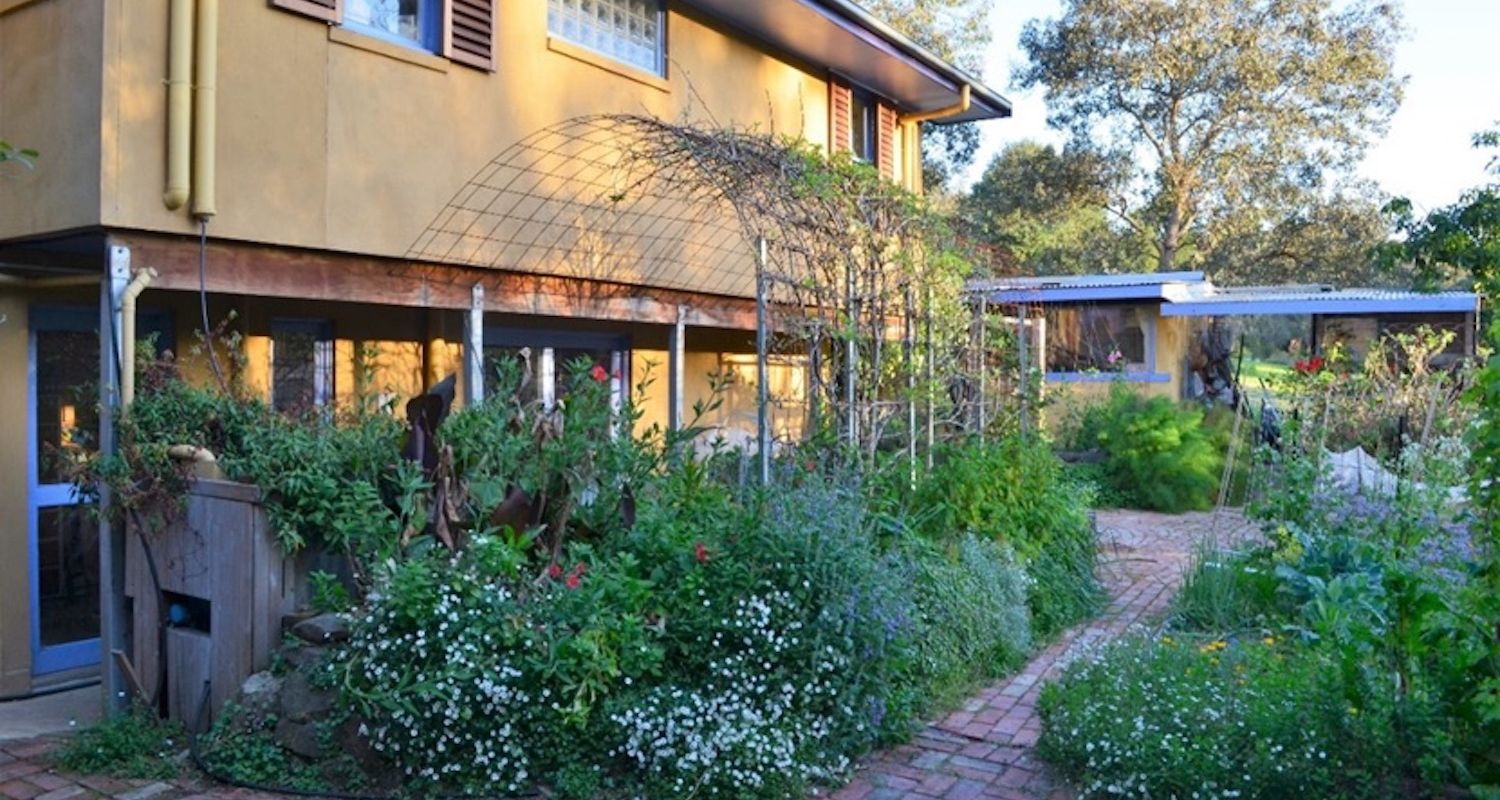 The Solomons were looking for a suburban farmhouse with generous-sized but basic rooms, established fruit trees, a bit of land and a northerly aspect. They found it in Research: a basic comfortable house 25 km from the centre of Melbourne on two thirds of an acre of land...