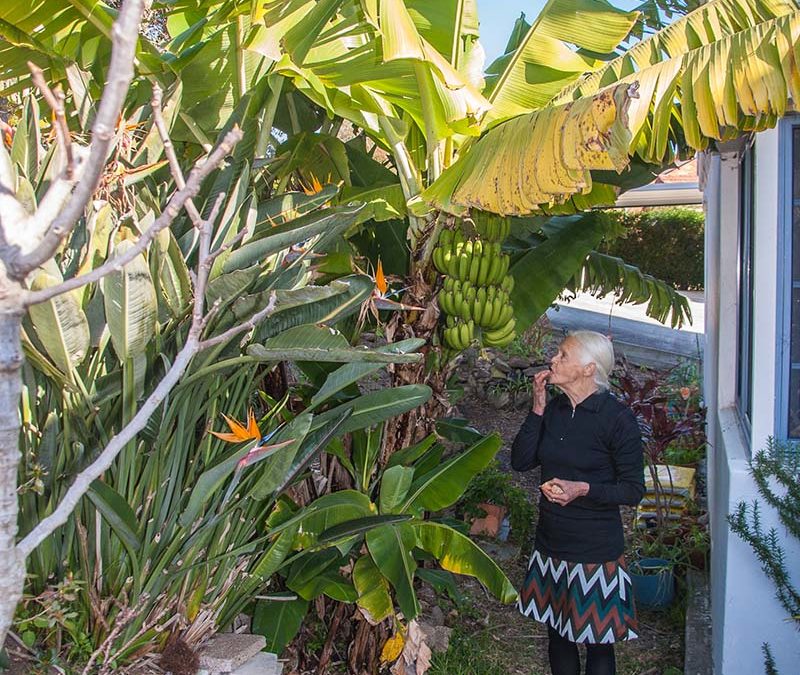 Newcastle was always going to be one of the highlights of our RetroSuburbia Roadshow. With three events on consecutive days we arranged to stay with friends Maria and David Larratt in suburban Newcastle. Maria had been the energy behind a great Newcastle event launching Permaculture: Principles and Pathways Beyond Sustainability back in 2003. Almost a decade before Maria and David were youthful vets attending our Permaculture Design Course in Hepburn. Life has moved on for us all. David and Maria are in the process of passing on ownership of their very successful veterinary practice, their boys Leo and Oliver are sharing house in the big smoke and Maria’s mum Rosa is in transition to living with them. Maria is active in Permaculture Hunter and is focusing more of her energy on community activism and home self-reliance now that the business has been sold. We had taken advantage of our planned stay with the Larratts to have our stock of RS renewed with a shipment sent by Christine at Permaculture Principles as well as assorted other book stock from different distributors and publishers. Su was very pleased to see all the boxes and do a stock take and repack that made their front room looked like a transport depot. 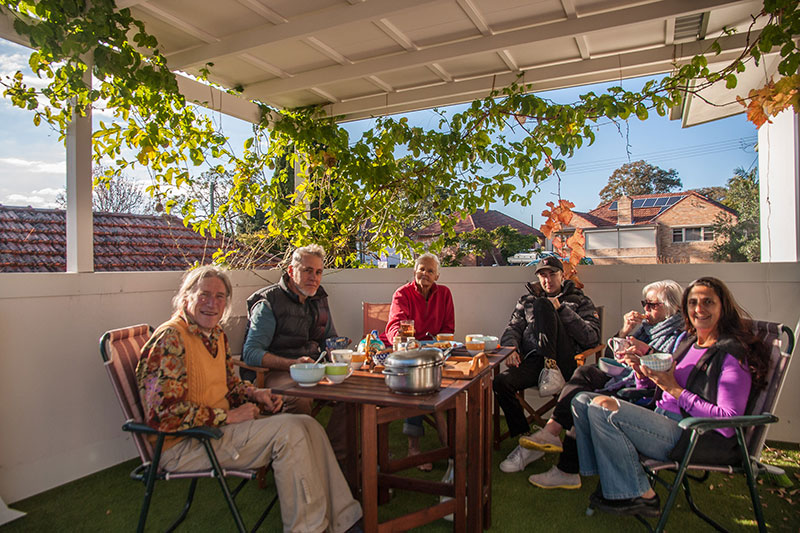 The first gig was in the Hunter hinterland at Cessnock Library with a small but enthusiastic crowd of 38 including central coast permaculture teachers, Meg McGowan and Graham King pleased to catch Aussie St but somewhat peeved that their area hadn’t managed to get a place in the roadshow, given how much interest there is in their region.

The next day’s gig was at the Lake Macquarie Performing Arts Centre. Before the event we had a picnic with David, Maria and Rosa at Wangi Wangi and wandered the foreshore where Su’s parents had lived for some years in the 1980s. We marvelled at a whole town spread around the lake foreshore, doomed to be inundated by rising sea levels and arrived at the venue with more than an hour before the 2.30pm start. David had a nervous and intense time working with council staff trying to solve tech problems that involved getting a small but good projector to replace the massive but ancient ceiling mounted model to allow the large crowd (330) to see the beautiful Brenna Quinlan graphics that illustrate the story.

It also involved David ferreting out a massive stepladder to change the direction of stage spotlights, no doubt in contravention of OH&amp;S protocols. We got going twenty minutes late but by Su’s usually critical account, David managed to maintain the energy and passion of Aussie St followed by some great questions including some about the serious policy and planning issues implicit in the story. 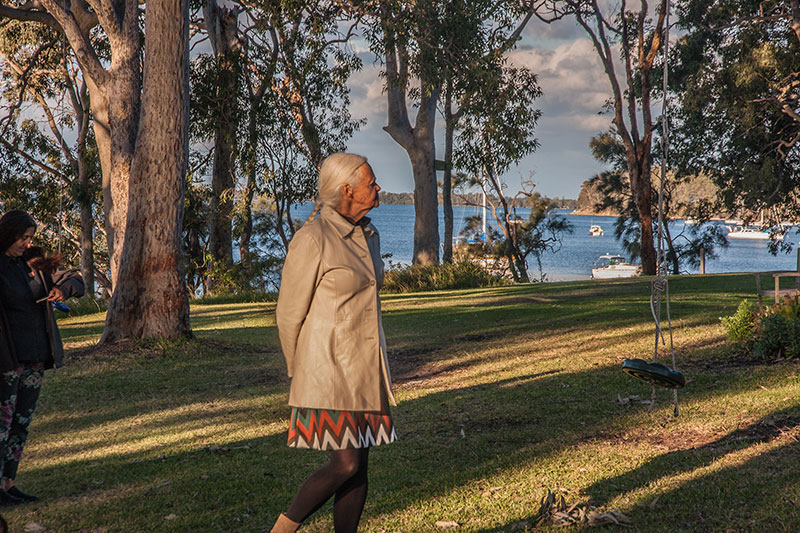 Next day we headed into the Newcastle Regional Library early to set up the bookstall for “Ecosuburbia Fair Share” – a whole day event that was the brainchild of Alex Mills, manager of Community Programs and Partnerships at Newcastle City Council with stalls by Permaculture Hunter, Purple Pear Farm, Slow Food Hunter Valley and others. It culminated in the Aussie St presentation in the town hall across the civic square for which 220 people had booked (with more wanting to come). Amongst the activities during the day were speeches by three school girls preparing for global Students Strike For Climate on September 20th. Their speeches addressing the climate crisis from various perspectives all invited response for which Maria and library youth support officer thought a reading of my “The Apology: from the baby boomers to the handicapped generations” might be good timing. David was a little cautious about such a reading given the length, scope and savage nature of the writing. In case it was needed he had an edited version printed out for the occasion. The response of the small crowd was interesting. The girls seemed energised by the address while various people of our age came up to afterwards expressing their appreciation. Some were quite emotional.

As we packed up and headed across the square the rain intensified which probably contributed the crowd being only 170. We find free events tend to have a 20% drop out so always encourage organisers to allow overbooking. Amorelle Dempster from Slow Food Hunter gave a brief passionate and informative presentation on the importance of local food while John Shiel from Permaculture Hunter reviewed the evidence on climate change as a context for considering more creative and radical responses such as RetroSuburbia. Aussie St was streamed live on the Newcastle Library’s Facebook page. A debrief meal with the event organisers followed by a visit to a solstice party at a wonderfully feral example of RetroSuburbia completed a busy day. A band performed in a large shed stacked with canoes and other craft used by the radical activist collective in actions against Newcastle continuing to be the largest coal exporting port in the world, despite the positive developments that make the city a leader in sustainability initiatives.

Next day a visit to an aged cousin in her 80s and her husband in his 90s at East Maitland was a great catch up and inspiration. Old people still living at home with frugal habits, helping others in the community, quick of wit and persistent in attending to the necessities of life are an inspiration for baby boomers (and younger folk) dealing with aging. Nevertheless the large multi-bedroom house where activity and use of the space was declining reminded us of the retrosuburban opportunities, and challenges to share our space for our own good and that of the community and the planet.

Another couple of days with the Larratts included a visit to The Underground local music venue at The Grand Hotel for Tuesday night jazz where the band played to an appreciative (minimal talking) audience. The band blew our socks off, especially virtuoso guitarist Leo Larratt. A casual brief conversation with Gleny Rae (who’s song Carrot Vs Bike we referenced in the Storage of Stuff chapter of RS) seemed to confirm David Larratt’s briefing that the Underground was a “musicians venue”.

Next day include a grand tour of beaches, the World War One (and steel industry) centenary clifftop walk and the massive increase in fancy apartment buildings on the brown fields sites of the Newcastle foreshore. I didn’t get the photo to match the thought that the lower levels of these buildings might make good oyster farms in the future when the sea level is 5 to 10 m higher, as suggested by much evidence that the IPCC continue to ignore. Our tour guide informed us that requirement for car parking basements were mostly waived to reduce costs for the developers struggling to make a quid. Hopefully this was based on evidence that apartment dwellers are rapidly moving beyond car dependence. Or maybe this was tacit acknowledgement that pumping out basements below sea level could get more difficult in the future.

Our last local stop before heading up country to Mudgee was a visit to Purple Pear Farm, a private environmental education property using permaculture design and biodynamic techniques run by Mark Brown and Kate Beverage. With the region still in the grip of drought, and working on some very tough soils, the results in tree growth at Purple Pear were slow and limited. But the mandala style market garden planted with seedlings all raised on site, cultivated and fertilised by rotating chook domes was impressive both in its winter productivity and scale (small commercial). It was also great to see three generations of the family on the same property, a hopeful sign that the culture of permaculture is gradually growing roots. 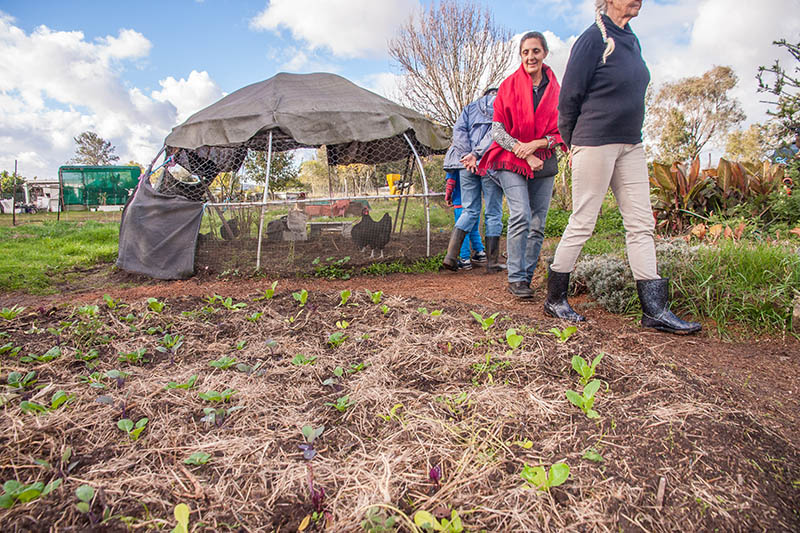 We left David and Maria’s, loaded with citrus, jam, cake and other goodies after a wonderfu visit and reconnection after so many years.