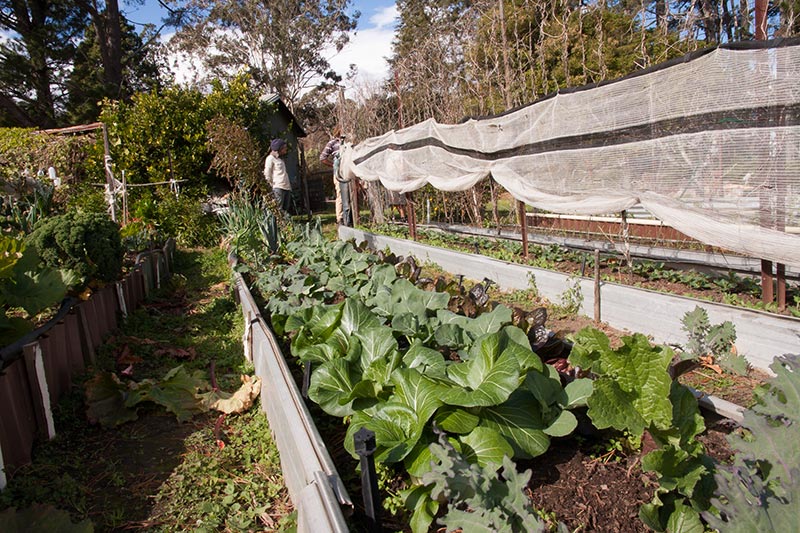 Leaving Millpost we headed north on the Federal Highway, stopped for a cuppa in Moss Vale and inquired about any local community gardens because we wanted to maintain our everyday consumption of fresh greens. We found the community garden but no one was there and the gates were locked. The overgrown mixed perennial areas outside the fence didn’t seem promising at first but a closer inspection showed resprouting wild fennel, self- sown rocket, lush dandelion and some surprising good self-sown lettuce, enough to make a salad along with Melliodora carrots, sourdough bread, goat cheese and artichoke hearts in oil. Thanks community gardeners!

It was then down the Hume Freeway, around the Sydney toll roads and out across the Hawkesbury plains to the sprawling campus of Western Sydney University for the next Aussie St gig. Before the presentation we went along for the low-key tour around the Secret Garden, a disability support venue with gardens, animals and earth buildings. The tour leader’s name Eric Brocken seemed familiar and when we got there, meeting Eric triggered David’s memory of being hosted after a speaking event at the Uni more than 15 years before when old mate and mentor Stuart Hill was still at the helm of Social Ecology. With Eric adding his horticultural knowledge, permaculture passion and experience in environmental education, the potential of Secret Garden to become an excellent permaculture demonstration site looks promising.

There was a good crowd for Aussie St with Jen Dollin of the university sustainably office MCing, but the event did seem a bit tame after the incredibly enthusiastic audience at Nowra. The highlight for us was reconnecting with Eric and, especially, his son Aaron who is a young farmer and passionate local food advocate and activist. After spending a night at Eric’s place in Kurrajong Heights where David had stayed all those years before, we inquired about possible places to camp in the Blue Mts. A phone call to check and we had an invite to camp at Johnny Chorley’s mixed orchard and wild forest farm on the slopes of Mt Tomah just below the cool climate botanic gardens at 1000m above sea level.

Along Bells Line of Road to Mt Tomah we dropped in to check out Aarons “market garden” at Bilpin; actually a strip of land along a lane leading to the most radical collection of rentable bush accommodation one can imagine. We heard about the engineer turned feral builder who had offered his lane (on reasonable shale soils) to get Aaron started and met the neighbouring retired Italian orchardist Phil who was happy to see Aaron using some of the water from his massive dam that once irrigated a thriving apple orchard as well as make use of some of his unused land. The whole set up seemed emblematic of the opportunities for informal and formal share-farming arrangements that could allow energetic and entrepreneurial young folk get started in farming without the burden of debt. Between socialising and networking over the following days David did manage to get back to the market garden and at least get some seedlings in the ground while Aaron borrowed Phil’s rotary tiller to turn in some overgrown green manure crops for the next plantings. 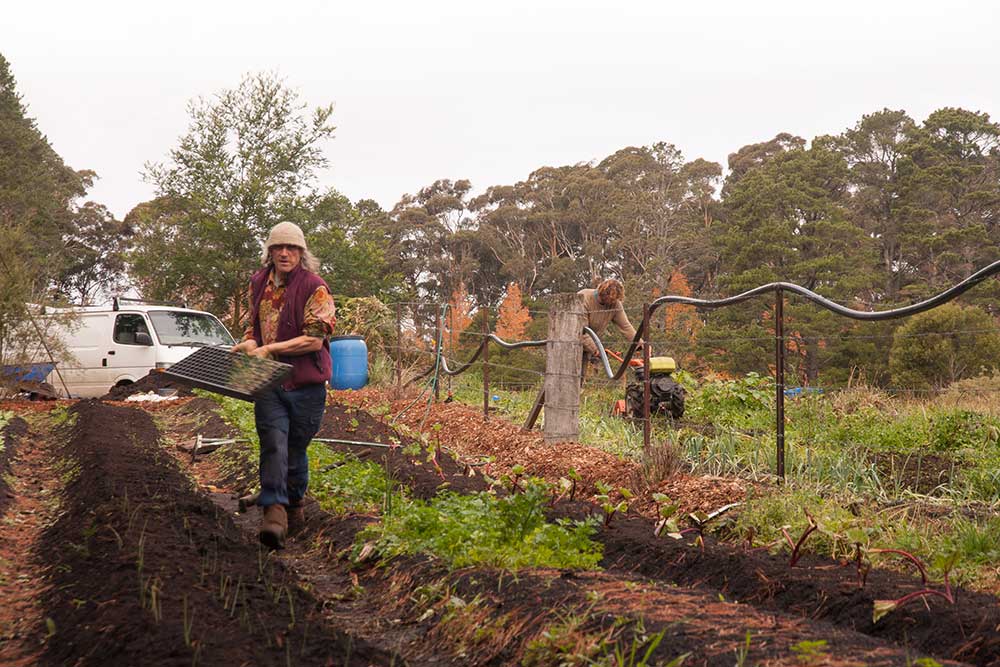 While the social and enterprise relationships we saw at Bilpin were exciting, the biological vitality and deep links to country we experienced at Mt Tomah were enchanting. Mt Tomah is one of very few volcanic peaks with deep rich soils and tall forests of cut-tail ash (Eucalyptus fastigata) and “warm temperate” rainforest (although the botanic gardens and locals call them “cool temperate” David begs to disagree based on floristic structure) that rise above the harsh infertile sandstones of the Blue Mts.

David was familiar with Mt Tomah botanic gardens, having visited in the early 1990s when they were under construction, the second with Eric in 2003 when he was a ranger at the gardens. From our camp between the farm machinery and sheds at Johnny’s we could walk up his drive to the Bot gardens but it took days before we did so because we were captivated by the plants and people closer at hand. The place seemed a classic example of baby boomer back to the land self-reliance where a combination of novel horticulture inspired at least in part by permaculture and nature conservation had woven a dance of hope and achievement with disappointments and frustration over decades.

Around sun facing slopes in a series on forest clearings plantings of hazels, a few huge chestnuts and assorted other cool climate deciduous tree crops, berry fruits, citrus, giant rampant kiwi vines and some of the largest avocado trees we had every seen. A lineage of anti-aviaries in varying states of repair ensured harvest of vulnerable crops while some housed small flocks of poultry while a few goats, sheep and ponies helped compliment slashing in keeping the land from rapid return to forest. Like all horticultural properties, farm equipment, gear and sheds abounded between the massive eucalypts and regrowth rainforest. Water supply was from a spring, one of the largest on the mount – it tasted fantastic.

Johnny’s workshop revealed a practical man able to turn his hand to anything needed to keep farms ticking. Having recently lost his life partner to cancer, Johnny was refocusing on how to manage the place with help from Aaron and “the girls” all of whom held his affection and admiration for their efforts to become self-reliant and productive. He was providing opportunities for the next generation to survive and thrive, passing on skills and gaining help in managing a place that needed more hands on deck.

It turned out these connections were reconnections with Aaron having been born at the farm when Eric was a ranger at the botanic gardens, and one of “the girls” being the daughter and friends of Johnny and his wife (and had grown up with Aaron). 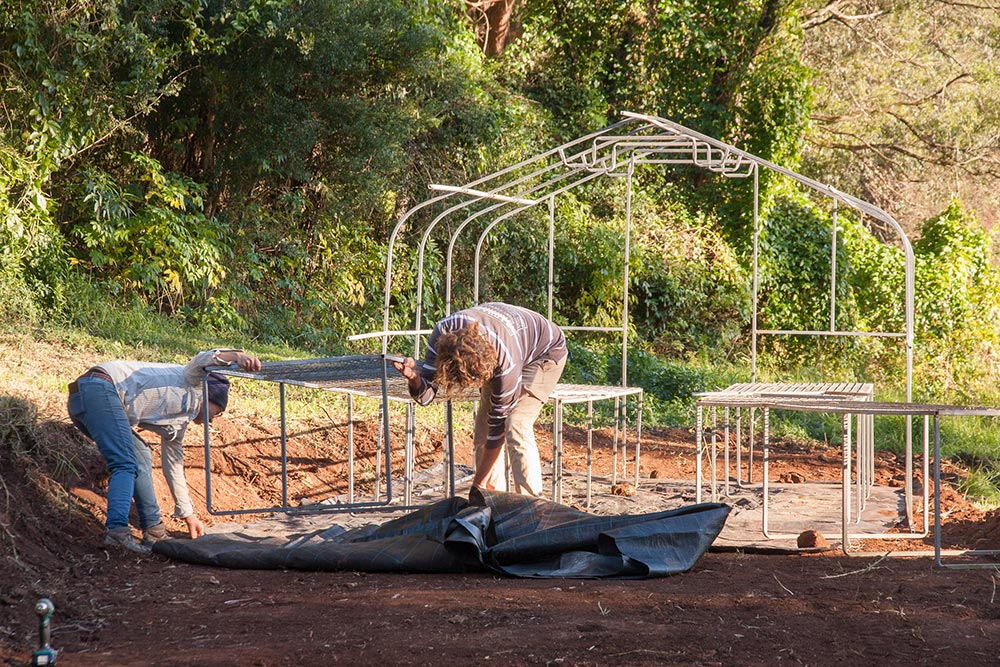 Aaron and friend setting up propagation house at Johnny’s

We hit it off with Johnny and although Su turned down his offer of a room, hot showers etc, we did accept his invitation for a meal in his comfortable owner built house. In return he often joined us around our campfire as did Aaron and “the girls”. Johnny made jelly for us from medlars we collected, gave us a cutting board for our camp kitchen, made a metal windshield from scrap metal for the gas cooker in our camper trailer and accepted some money for a box of the most delicious and large kiwis which we continued to consume as they ripened all the way through NSW to the SA border where we ate the last. It turned out that Johnny Chorley was no Johnny-come-lately-back-to-the-lander, but fourth generation born on this land where his forebears has logged, sold tree ferns and quarried the basalt rock, reflecting a pioneering exploitation of the resources that went with his grandfather being a foundation shareholder in the original Broken Hill mining syndicate. What a lineage and we later “met” Johnny’s grandfather outside the Broken Hill Council Chambers.

David spent a lot of time using his reading landscape skills and tapping Johnny’s wealth of knowledge, trying to understand the sequence of regrowth in both the huge eucalypts and smaller rainforest species but he was caught off guard when Johnny identified the huge eucalypt over our camp as only forty years old. David felt silly in not recognising the tree as one that had regenerated on the edge of earthworks created for the house in 1979 but the massive scale of tree was outside of his experience of growth of any eucalypt he had seen. The wonders of nature never cease to amaze. 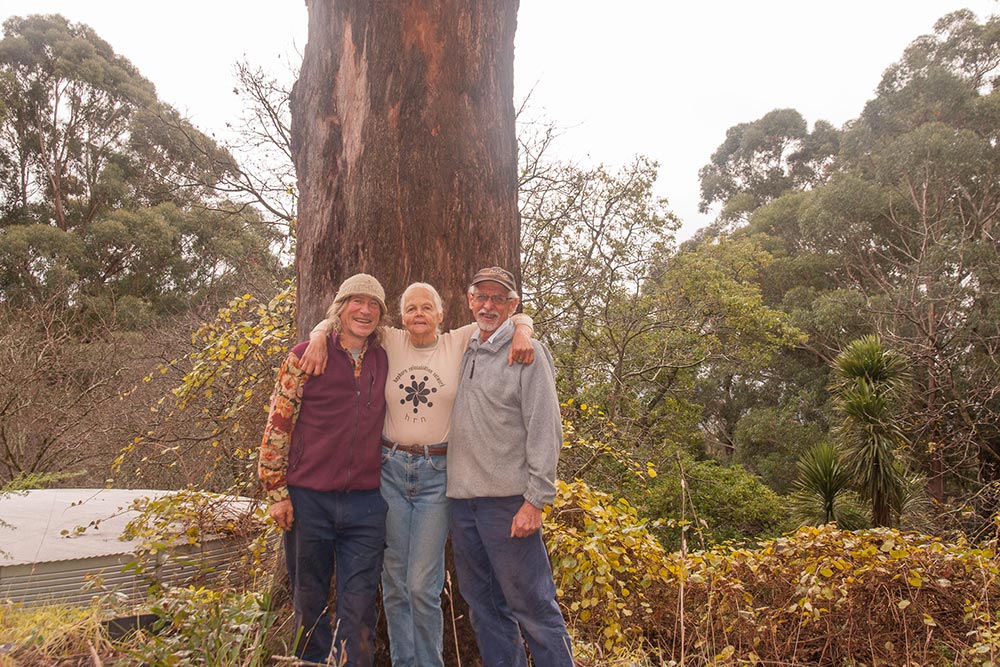 David, Su and Johnny next to the 40 year old E. fastigata

The side trips to visit cousins and aged uncles in Sydney involved some unscheduled detours through the Sydney harbour tunnel despite directions from “Lord Google” and required some coordinating on successive days to avoid two trips to town. But Su was definitely in camping mode and reluctant to sleep indoors, so we pushed the limits of using Google maps to find a place to park The Blue where we might have an undisturbed night’s sleep in the northern suburbs of Sydney. After cruising several quiet streets near national parks all appropriately barred from vehicles we found an unmaintained “street” inside open gates between concrete barricades, where there were no signs saying what not to do. We pulled up at the overgrown kerb and set up our bed in the back of The Blue.

In the morning mist and drizzle we discovered we were parked in a “wasteland” where a profusion of flowering native veg and birds mixed with dumped rubbish, bmx and four wheel drive tracks, burned heathland, camps of people (in four wheel drives) and early morning dog walkers who returned our morning salutations. A huge electricity substation seemed to be the reason for the low side uses of the surrounding land. Incredible to have stumbled onto such a place in the affluent and manicured suburbs of Sydney. From our campsite we headed to Manly farmers market through a Sydney deluge in search of spelt sourdough bread, saw a brush turkey amongst the high rise and joined the young folk having Sunday breakfast in the cool cafes. We certainly managed to make the visit to the metropolis a different one.

Heading north to our next three gigs in the Hunter region took us up the Putty Rd, a route David and Oliver had travelled in The Blue a few years before to visit relatives unable to attend Venie Holmgren’s funeral. Venie’s own journey down the Putty Rd in her campervan in 1977 is recorded in her travel memoir, A Sense of Direction.

After the verdant forests of Mt Tomah and the rain of the trip so far, arriving into the Hunter was a shock on three levels, the desiccation of drought, the brooding coal mines mostly hidden behind screening hills and vegetation and the vineyard tourism with competing entrances, architecture and manicured landscapes trying to deny the drought. We found a free camping common to connect with a very different sense of place amongst the ironbarks and drought stressed river casuarinas in the village of Broke before heading for suburban Newcastle to stay with our hosts and old friends Maria and David Larratt. 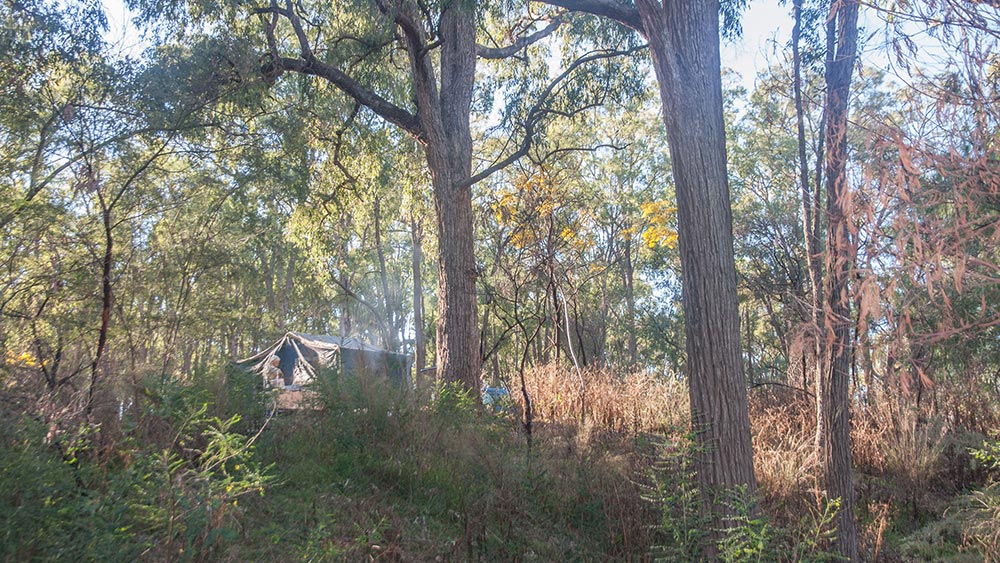 Morning light on free camp at the Broke common under Ironbarks. 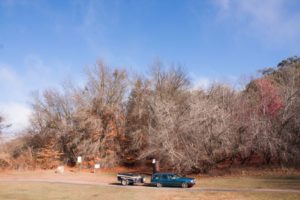 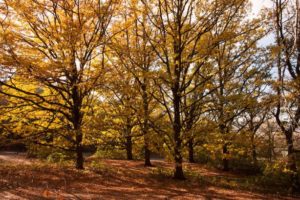 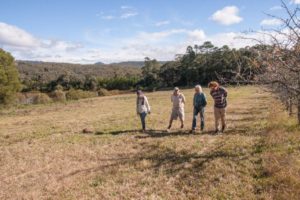 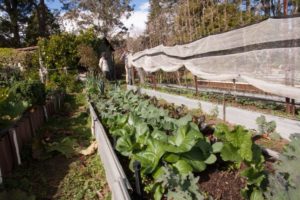 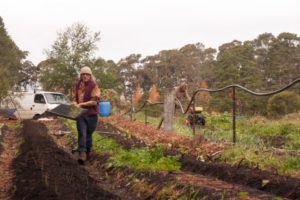 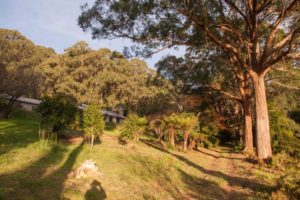 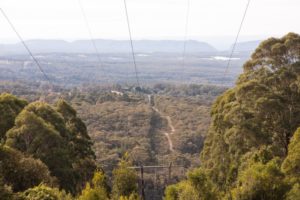 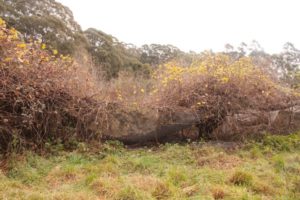 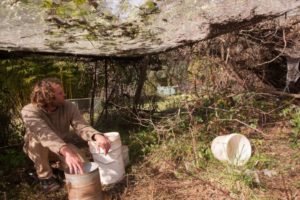 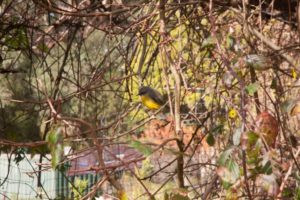 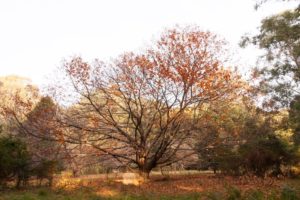 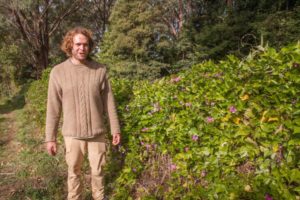 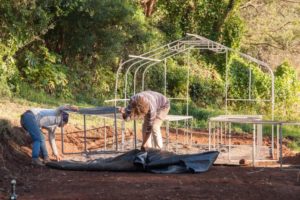 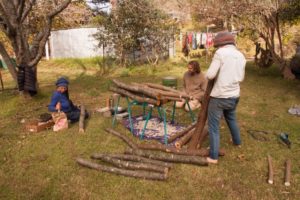 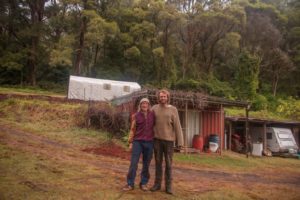 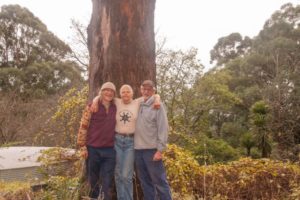 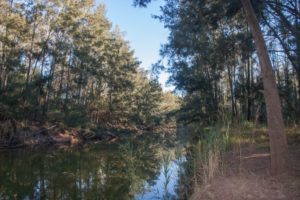 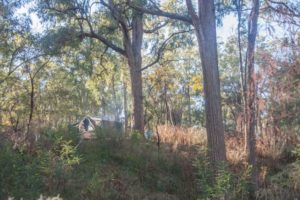 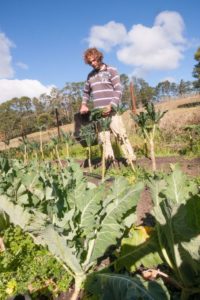 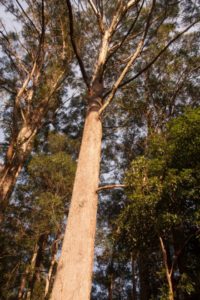 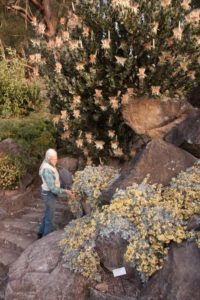 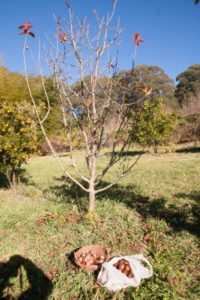 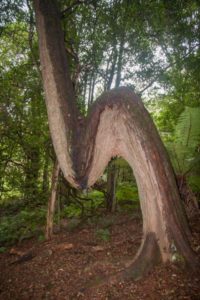