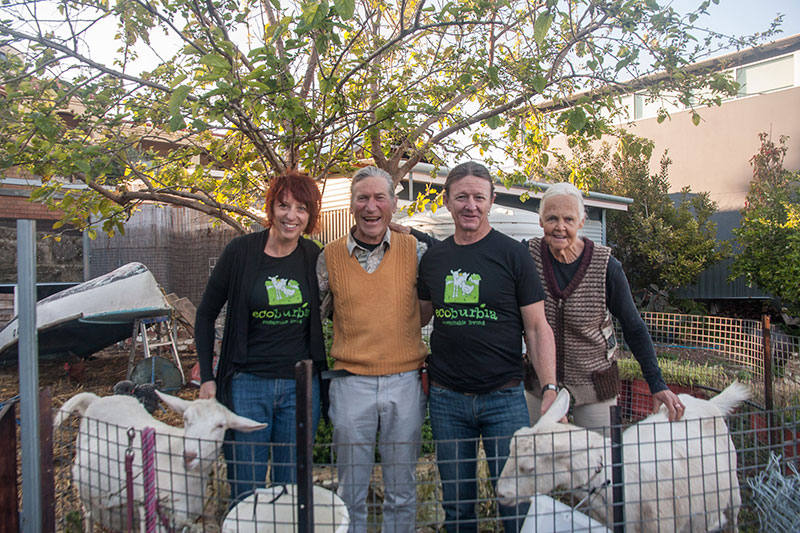 Sunday morning Shani and Tim had a slow start after such a high-energy day, while Su did follow up business stuff and buzzed around the kitchen on a high from all the good vibes. By afternoon we were all at it planting locally indigenous acacias (good goat fodder) on public land down the road from Ecoburbia and networking about an upcoming neighbour party. 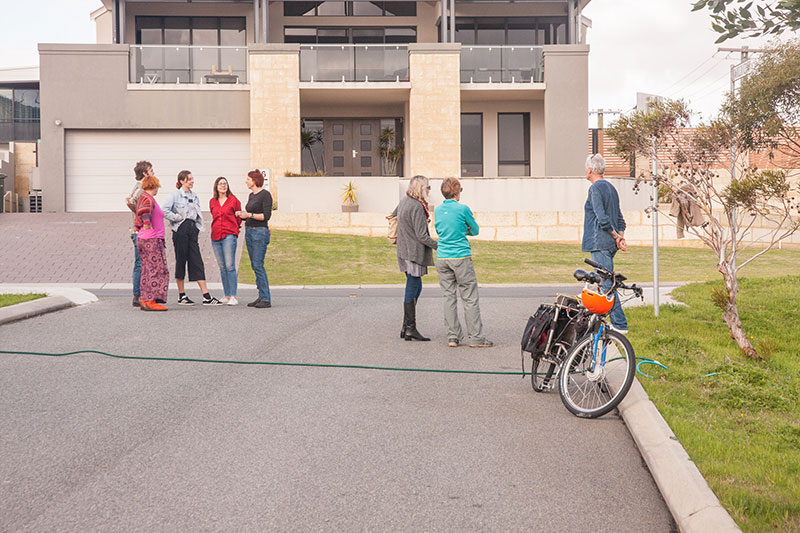 Shani engaged in the neighbourhood

A book order back to Christine and Richard at Permaculture Principles and we had our figures crossed we would get stock before we left Ecoburbia heading south at the end of the week. We resigned ourselves to taking book orders at Armadale District Hall gig on Wednesday organised by the Switch Your Thinking sustainability team at Gosnells City Council where 180 had booked for the free event.

The day before was another trip down memory lane for David. He took one of Shani and Tim’s electric bikes to visit the memorial plaque for Jack Holmgren’s ashes in Fremantle cemetery, managed to get lost, saw more of the suburbs and the illusion of one’s own power when pedalling a bike that exceeded the rules for an unregistered electric bike. Back at Ecoburbia there was a reconnect with a close friend of David’s brother Gerard whose ashes were spread in the breakers at Cottesloe beach in 2010. More sharing that provided insights into the past and the passed. 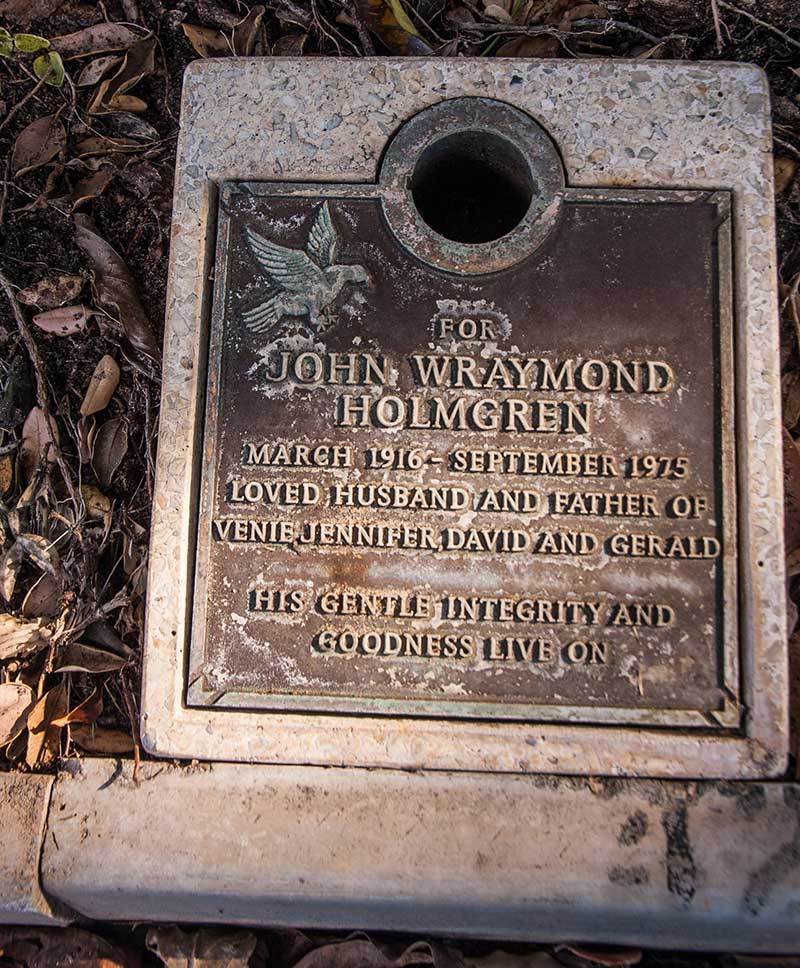 The plaque for John (Jack) Holmgren at the Fremantle cemetery

That night we had a shared dinner party inviting some old and new permaculture activists including one Dennis McCarty who had introduced himself to David at the Freo event. David knew Dennis’s name as the WA distributor of Permaculture One and host of Bill Mollison in the year before PAWA was founded in 1979. For even some of the “elders of the permaculture movement” present like Ross Mars, meeting Denis was a first and an opportunity to exchange stories about those years, including ones about Bill Mollison.

The Armadale gig was different from the other WA events in that it was initiated by the Council officers and had David matched with leading pubic transport advocate, activist and academic Peter Newman from Curtin University. Peter was giving his big picture techno- optimistic view of sustainable carbon neutral cities with local and global examples of some of the best of mainstream sustainable development. Rather than having another high-level presentation from David giving a different view of the future, the storytelling of “Aussie St” was the perfect balance with a follow up panel discussion. Shani Graham just couldn’t help herself and had to come to see what would happen with these two very different visions of the future. She directed our journey along the highways under construction, crossing the freeways with medium density developments and bus stations over new rail lines that Peter Newman has had a role in bringing to reality.

For a free council event where we expect no-shows it was disappointing to only get 80 from 180 booked. To Shani it seemed the audience was split between those attracted by Peter’s name and those attracted by David’s, while the punters the organisers hoped to get with the generic “Sustainability in the Suburbs” not showing up in great numbers. Despite the difference of views (outlined in David’s Short Personal and Global History of Retrofitting The Suburbs), David and Peter’s exchanges were respectful of the others work and recognition of common aims. David felt perhaps he had squibbed at critiquing Peter’s faith in urban density as an essential aspect of sustainability, while regarding the technical complexities of net energy returns of the rapid 100% renewable rollout without the need to downsize were too great to begin to unpick in a half hour Q&A.

Su thought the event was a bit flat but maybe that was after the energy of the Freo event and her own fairly curt dismissal of Peter’s presentation that did not even mention behaviour change, frugality or equity as issues in dealing with the climate emergency.

The following morning David got to experience the public transit system that Peter Newman had played a large role in beginning with his activism in 1979 stopping the closure of the Fremantle-Perth rail line. A one hour trip on public transport to Mt Lawley had David seeing the transformed metro landscapes from a train that was 70% empty. Although the return journey had a few more passengers, David reflected that it takes more than good public transport to help kick the habit of addiction to motorised personal mobility. An interview in the home studio of gardening writer and podcaster Deryn Thorp and colleague John Colwill about RetroSuburbia went well with much enthusiasm for the book. Their “All the Dirt” podcast on gardening sustainability and food won the 2018 Horticultural Media Association of Australia award for the best audio presentation in Australia. Friday was our last day at the Ecoburbia base camp. An early morning visit to the hot baths and pool at Bicton on the Swan River followed by breakfast on the jetty where David was taught to swim age 5 by his mother Venie and where he regularly fished for tailor and flathead with his father. Another trip down memory lane transformed by interpretative signage that filled in missing parts of David’s knowledge of childhood territory including the Noonga name Kwoppa Kepa which means beautiful water. 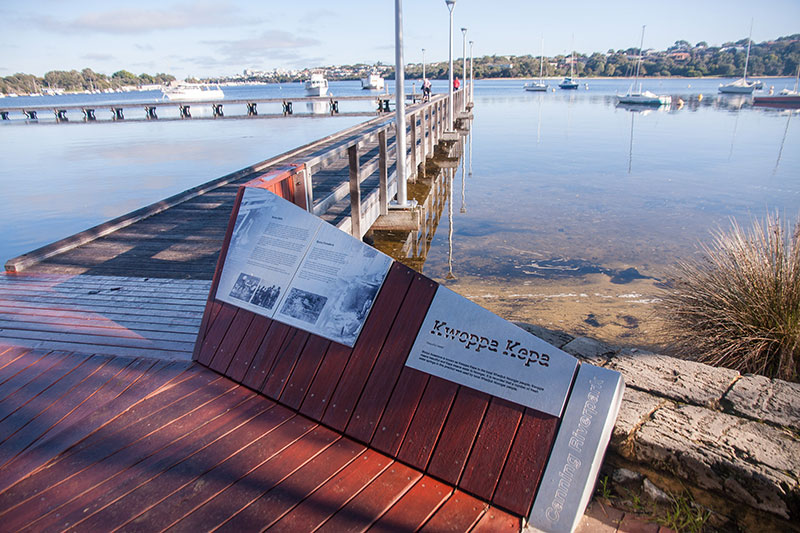 A rendezvous with Craig Clitheroe had David recording some of those childhood experiences and how they contributed to the origins of permaculture for the documentary while Su explored the scrub (barefoot) on the wilder parts of the river escarpment beyond the manicured parks and ostentatious houses.

Lunch at an organic café in the Harris Rd shops, a photo in front of 9 Wrexham St Bicton where David grew up and a drive past the primary school completed the nostalgia tour of Bicton. That last stopping point was soured when David was about to take a photo of the school with children playing in the background. A supervisor in dayglow yellow rushed over to insist no photos were allowed. The downsides of current obsessions with mostly illusory threats, while rushing headlong into hazards of unfathomable form and depth, momentarily disturbing the harmony of the day.

Back to Freo for a catch up with Denis and Sheryl McCarthy in their garden and back to Ecoburbia for a quiet dinner with Shani and Tim left us feeling contended in reflections and reconnections that we had made at the same time as feeling at home. 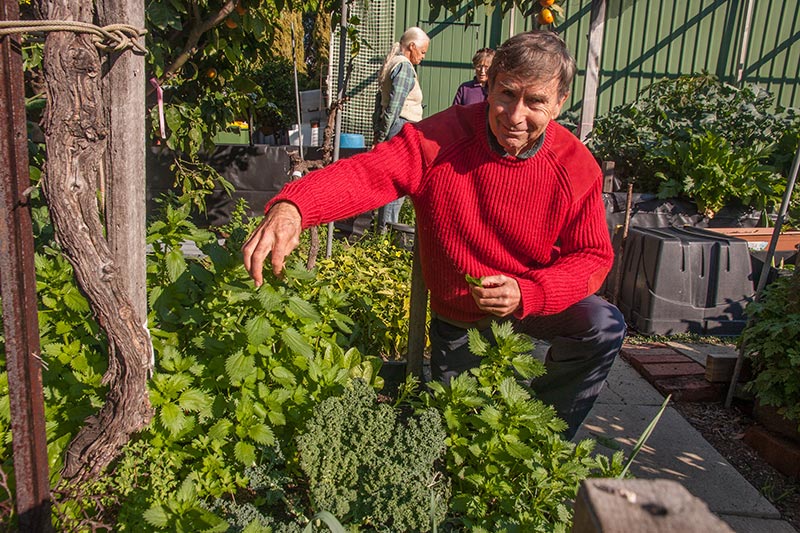 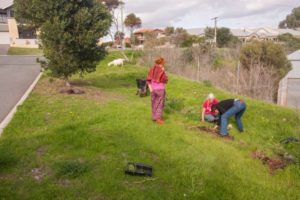 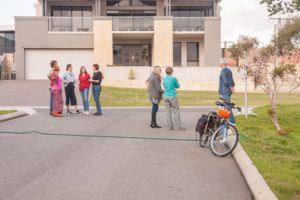 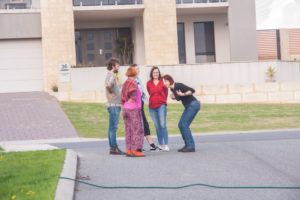 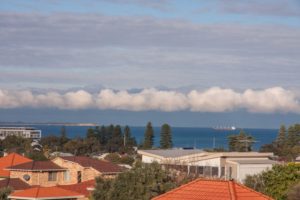 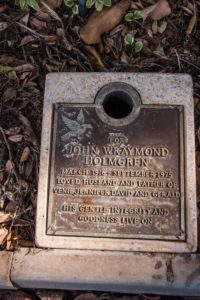 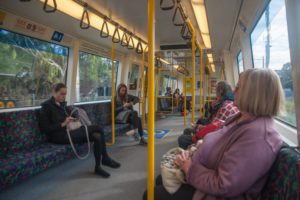 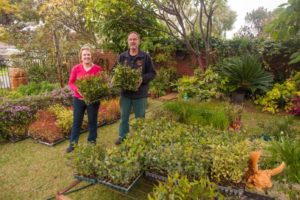 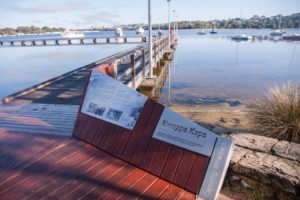 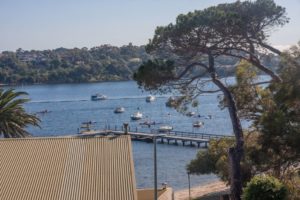 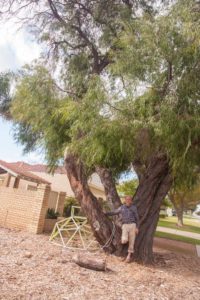 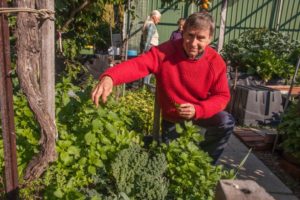 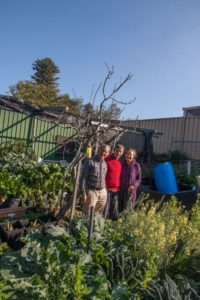 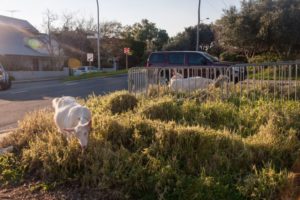 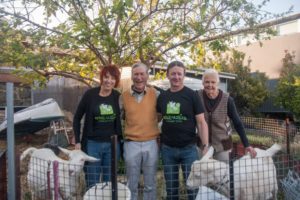 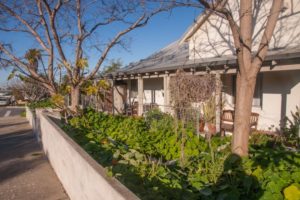