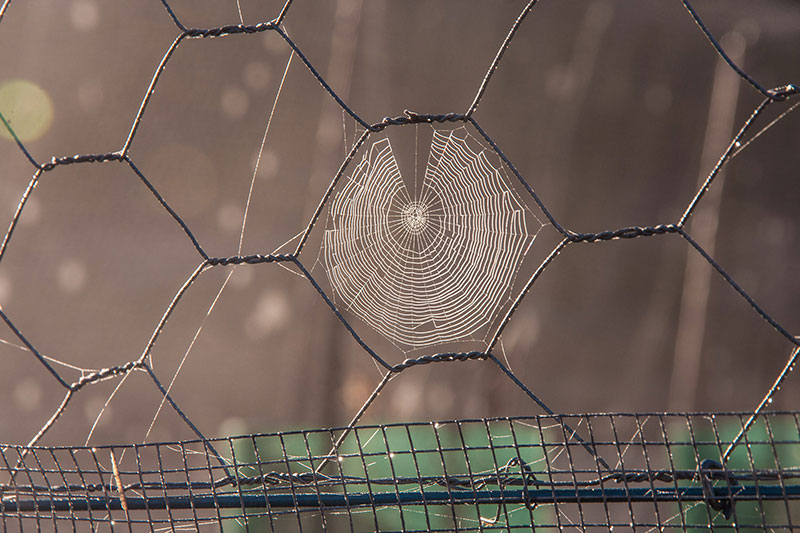 The journey to Mudgee took us through back roads of drought-parched and overgrazed paddocks and desolate cropping properties where care of home seemed to have been completely discarded but investment in extractive agribusiness was still in full swing. The poor rocky lizard country clothed in bush looked vibrant by comparison. Brooding behind screening vegetation were the coalmines feeding the local power stations and those of China. At one point we stopped to take a photo of the reclamation works on a massive mine mullock heap and have a brief lunch break in the car before continuing the journey. A burley guy in day glow vest got out of an official looking double cab ute to ask us if we were ok. We replied in the affirmative and he informed us that they would be closing the road shortly and we should move on in the next few minutes. Su inquired what they were doing to the road and the jovial bloke replied that they were going to “blow it up”. Just another mundane day in the rural Australia that underpins urban wealth (and debt). 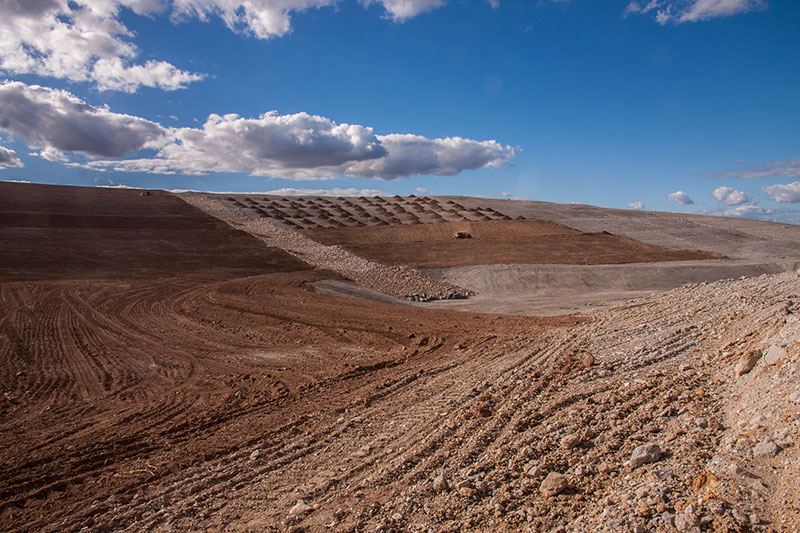 We had intended to drop our camper at our hosts Barry and Rosemary Hadaway’s property but had only enough time to drive straight to Mudgee, find a park for The Blue and True Blue next to the historic town hall, meet the librarian and tech person, unload and set up for Aussie St to a crowd of over 100. Not bad for a relatively small centre but one that drew a few enthusiasts from as far afield as Dubbo.

After the gig we gathered at place down the street for eats, drinks and connecting with local permie, slow food and kindred folk. Then it was back to the home of Barry and Rosemary who we had known in Sydney decades before through events organised by Permaculture North. Their “Baled Up” property is named after their beautiful owner built and climatically stable strawbale house. While many permaculture inspire properties are characterised by creative and feral reuse, the Hadaway’s had the mark of thorough research and design, attention to detail and order, judicious use of capital and technology and serendipitous and creative responses to context. It good to see mature age urban permies making a successful transition to rural life despite drought conditions and tough soils. The Hadaways transition included as active engagement in environment and community groups as reported in this news item about seed saving. 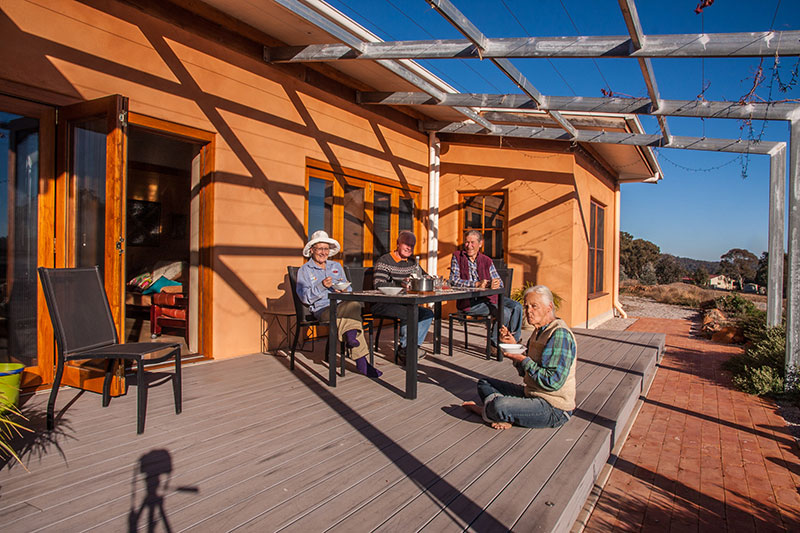 Breakfast with the Hadaways on the terrace at Baled Up

After Mudgee we headed north through beautiful bushland, then fantastic volcanic soil valleys where grain and feed crops seemed mostly going to fattening cattle in feedlots. Further on we crossed the famous Liverpool Plains where the stubble of harvested cotton crops stretched to the horizon and the stench and sounds of even larger feedlots had Su feeling sick at the thought of so much suffering and waste of resources. A donation for a camp at a small town oval seemed a relatively safe refuge from the harsh realities of industrial agriculture which underlined why we have always bought our clothes at op shops to minimise our contribution to the insane demand for cotton and why we do not buy meat through the central abattoir system let alone that produced in feedlot systems of animal and land abuse. 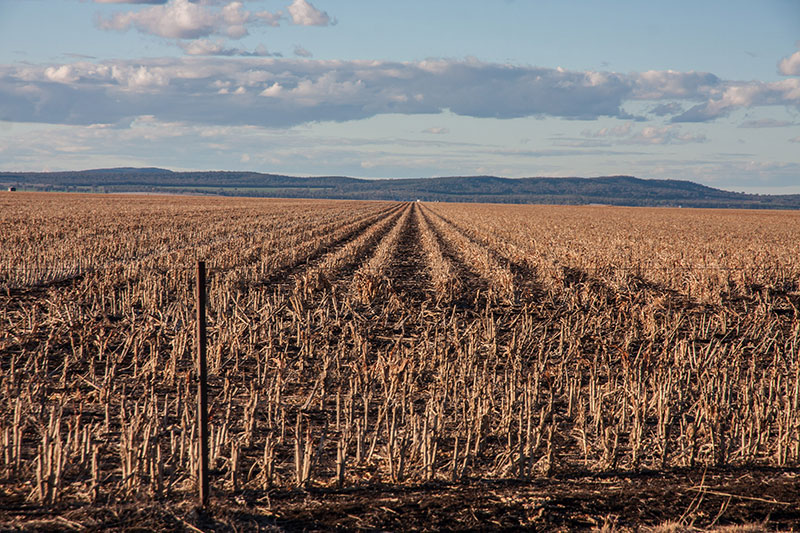 Cotton stubble stretching to the horizon on the Liverpool Plains, some of the best cropping soils in Australia

It’s a shame that so often the energy and rage of radical vegan activists doesn’t distinguish between the evils of industrial ag from the more modest problems of broad acre pastoral farming and the benign and beneficial aspects of holistic farm and household systems of animal husbandry.

Next day we checked out Tamworth, famous for country music, and saw perhaps even more overweight people than in other towns, and then it was up onto the New England tablelands proper with a climate not too different from our own in the central highlands of Victoria. That made the extremity of drought even more shocking. It wasn’t called New England for nought and yet it seemed the most parched of all the drought affected country we had seen.

Again we headed straight for the venue where setup was straightforward with Sustainable Living Armidale (SLA) the sponsoring organisation. Su was born in Armidale and we had spent time there back in 1990 when David ran some sort of permaculture class that escapes memory. The crowd was counted at 330, which was more than had booked, the first free event where that has happened. What a finale for the eastern Australian leg of the RetroSuburbia Roadshow and we sold enough books to lighten the load substantially for our long and meandering way west during which our focus will be following our fancy while free camping where solitude and supply of bush firewood rather than toilets and showers will be our priorities.

But there were a few important connections before we left Armidale. Following the event chairperson of SLA and ecological architect Mahalath Halperin and husband Jock hosted a shared meal at their house. We met many luminaries of sustainability in the region including old contacts and arranged to come back the next day for a personal tour of their modern passive solar house where her creative architectural design and his practical know-how produced some of the most creative and high class use of reclaimed and salvaged materials that we have ever seen. Despite the drought and dormancy of winter the garden was delightful combination of art and permaculture productivity.

Our hosts of our time in Armidale were Tim Marshall and his partner Annemarie. Tim is a pioneer of organic certification in this country, author of many books on organics as well as someone whose early formation was influenced by permaculture. That he, his then partner Stephanie Goldfinch and permaculture stalwart Dave Blewett had taught the first permaculture course in South Australia was a fact of permaculture history that was new to David. But our closest connections concerned Tim’s close association over many years at organic conferences and other events around the country and the world, with our best mate Rod May who died in a motorbike accident two years ago. We exchanged stories about Rod, reflected on the history of organics and permaculture and chewed the fat about issues including Tim’s latest project the Australian Organic Consumers Association.

Tim told me one of the issues he is pursuing in the organic industry is Fair Trade (not just for farmers and workers in poor countries we buy produce from, because this is a well established aspect of organic certification). At present contracts between mostly large but still family owned organic farms and the major supermarkets are not considered in organic certification. Any honest assessment of those contracts would show most if not all were patently unfair by organic standards or any common sense consideration. And wouldn’t that put the cat amongst the pigeons – no organic produce available at Moles and Bullies might make a lot of slick urban consumers sit up and take a bit more notice about their food supply. Of course we think permies everywhere should have a 100% boycott of Moles and Bullies and get serious putting their limited funds where their mouth is to support independent producers and suppliers. However we also think the case for cancelling organic certification for unfair contracts could have a wide support base without demonising the larger-scale organic growers following market forces toward specialisation and long distance transport to the most affluent markets. Support the farmers to refocus on local production for local consumers while boycotting the supermarkets is the solution.

We also visited the local community garden where Tim is the compost and carrot master. The gardeners were labouring under level 4 water restrictions but still managing to produce food in the harsh conditions, as was Tim’s modest home garden from which he gave us some produce, helping us continue our supermarket boycott. 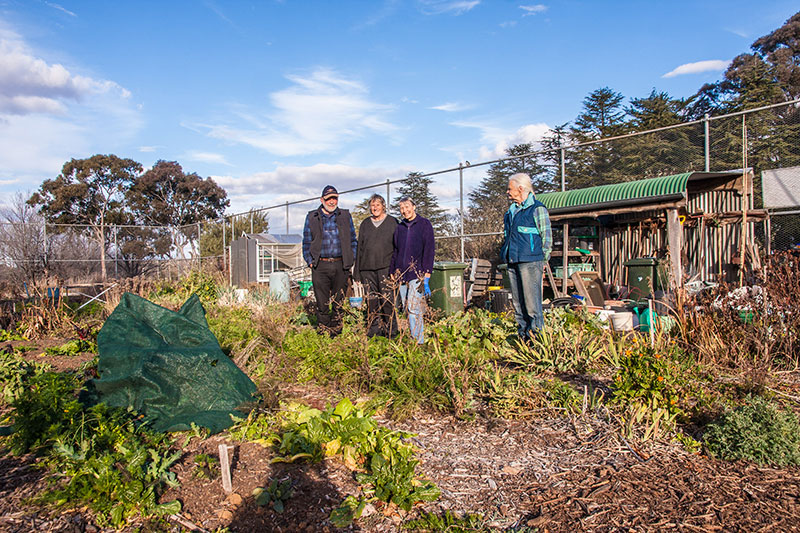 Without a plan but constrained by the low clearance of The Blue, we headed west for a month to play with before the west coast gigs of the RetroSuburbia Roadshow in August. 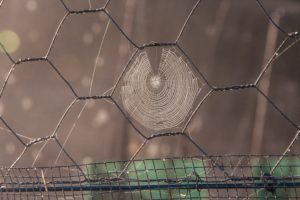 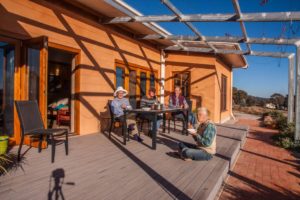 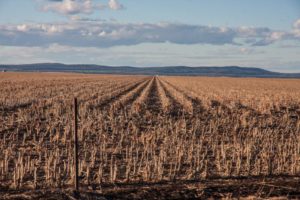 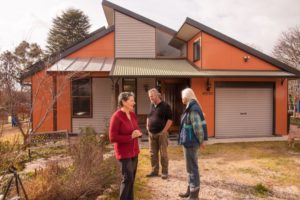 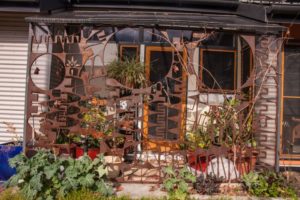 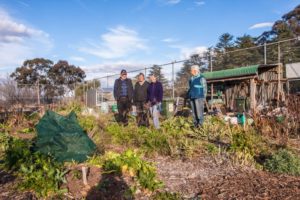 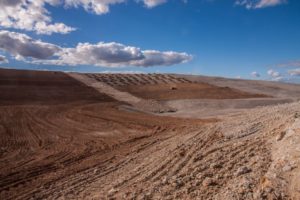 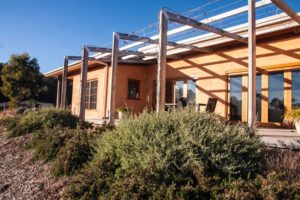 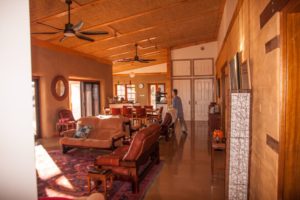 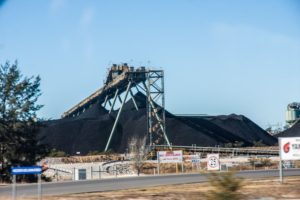 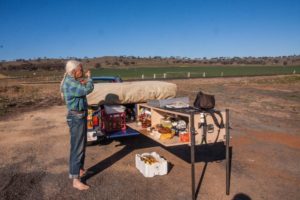 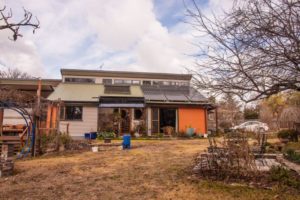 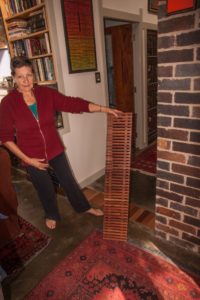 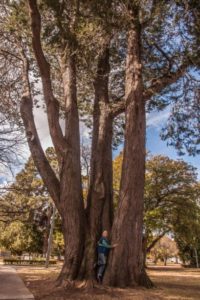