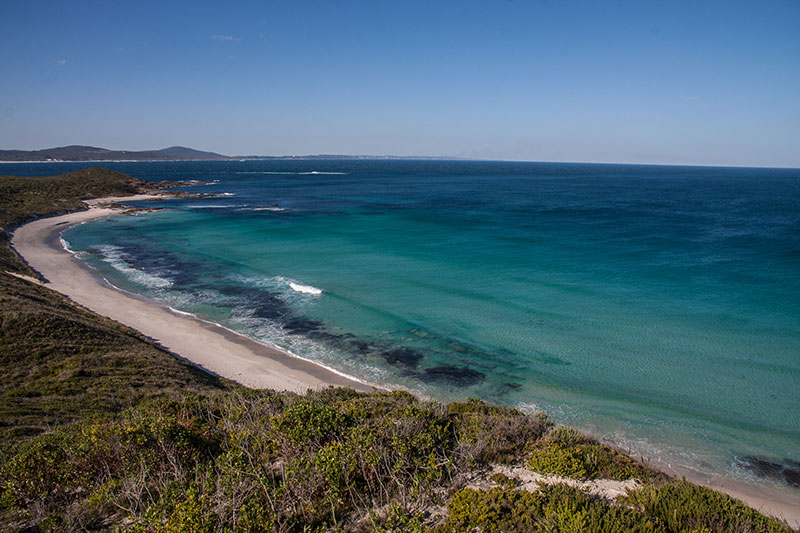 An evening chatting after a shared meal, a slow pack up next day, connecting with some of the kids in the community including one home-educated, and a couple of radio interviews for David saw us back in Denmark for shopping, some permaculture celebrity recognition and another round of nostalgia tourism. We went out on Ocean Beach Rd to find the land of David’s childhood holiday wonderland (an abandoned fruit orchard bounded by kangaroo paw swamp and virgin karri forest), which is now a rural residential subdivision of kerbed cul de sacs, large houses and a mixture of forest, lawn, ornamental and food gardens. The once virgin karri was logged in the 1970s but still contained old growth trees and the Bibbulmun Track.

This track traverses nearly 1000 km from Kalamunda in the Darling Range east of Perth to Albany on the south coast, and runs along the boundary of what was David’s family holiday house, a four-room farm house of the most basic 1930s construction, which was gone when David and his mother Venie came through these parts in 1979. Also gone was the orchard that David retrospectively realised was one of his emotional inspirations that contributed to his co-creation of permaculture with Bill Mollison in the 1970s. Ocean Beach was the place David learnt to body surf the perfect waves and drive a car (aged 10) on the hard flat beach. Today the instructive and interpretive signs, infrastructure and two coastal wind turbines compete for attention amongst the ever-present green forest of Swan River Peppermints (Agonis flexuosa). At Ocean Beach, David remembers a heathy vegetation, one to three metres tall of many coastal species. Today a forest of Peppermint, three to six metres tall dominates the view. Peppermint seems to be a much more dominant part of the vegetation everywhere compared with David’s memories from the 1960s. But the surf was the same, if more gentle than memory, and getting in the water with air temperatures over 20 was surprising easy. Catching a few waves has been a rare experience in a lifetime lived far from the sea but at Ocean Beach the reconnection across 50 years of separation from that place was instant. We had lunch on the beach savouring good food and health while wondering if sea temperatures in the 1960s were ever that warm in winter. 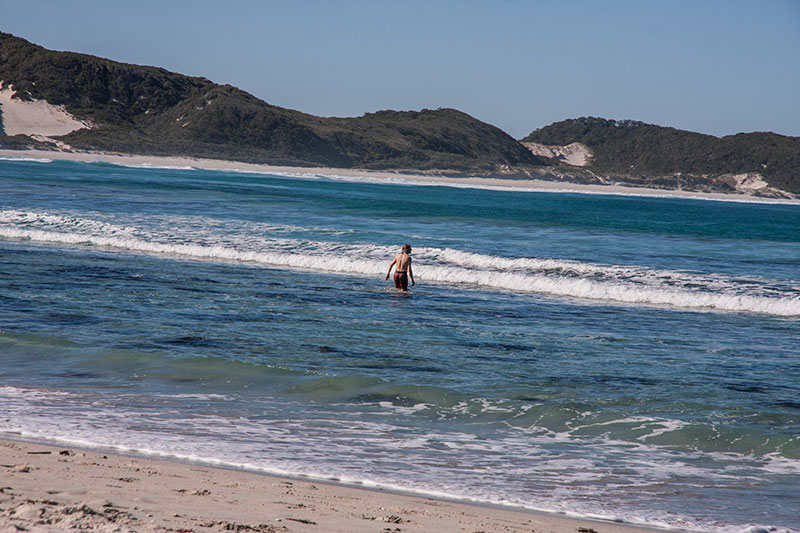 David going for a winter body surf without wetsuit

Although our Narrogin gig (our last in WA) required us to head north we had two days up our sleeve to camp on the fabulous south coast. Lots of beautiful places but almost all of them not available for free camping. Our local contacts suggest Parry Beach a little further west in another east-facing nook sheltered from the south westerlies that were forecast to bring rain the following evening. The camping ground is leased from the Denmark Shire by a coop of volunteers that maintain low-key nature based camping (not caravan park) with modest fees, under a forest roof of Peppermint providing perfect shelter and summer shade. In the summer up to 1000 people can be in the camp but for our midwinter visit there were only a handful.

We had collected a little firewood before leaving Living Waters. The friendly volunteer informed us that Denmark Council had now banned the collection of firewood anywhere on public land in the shire not just parks like Parry Beach. It seems like there is a conspiracy to ensure all the fuel burns in bushfires while campers cook on non-renewable and GHG producing gas. No wonder rural red necks think environmentalism is leading to a collective societal madness.

Next day we potted around camp doing domestic and office stuff, David had a half-hearted effort at hand line fishing off the rocks after agreeing with Su that the swell looked a bit rough to use the wet suit, flippers, mask and snorkel to dive for abalone. In the afternoon we took a walk to Bill Pinger lookout through the spectacular flowering heathlands overgrowing to Agonis.

David began to wonder if this massive expansion of Agonis was of concern within conservation circles, or whether Agonis’ indigenous status across the SW had shielded it from being condemned as an invasive species. The view from the lookout was stunning with a strong offshore wind blowing the tops off the breakers on the reefs. The beach looked inviting so we scrambled down and David stripped off on the empty beach for another swim while Su nursed her cough bathing in the winter sun. Walking back we broke council bylaws pick up a few sticks to supplement our fuel for the evening meal of sourdough toast, fried eggs, cabbage and carrot coleslaw topped off with Lyall’s roast acacia and Margaret River goats milk just as the southwest wind change brought rain and a drop in temperature. Snug in our camp with glowing coals for the comfort we read and wrote to the sound of rain on our canvas canopy.

From our internet connected camp MetEye showed us that Walpole, a little to our west had 22mm overnight but there was only a 10% chance of our camp getting rain more than 0.5mm from 8 to 11am. We got more than that, and so it was after midday before we had the wet camper packed and were the road back to Denmark to buy another couple of loaves of 100% rye sourdough at the health food store, on the assumption that the wheat belt might be a good-food desert. At Mt Barker between the showers and the clouds clothing the rolling hills, David confidently predicted the rain would disappear (based on the forecast) as we moved into the wheat belt. North along the Albany highway the temperature dropped back to 8 degrees and David wondered if it was snowing on Bluff Knoll in the Stirling Ranges visible between showers to the east.

The familiar names of Kojonup and Katanning came and went with a sea of canola – yellow so bright you needed sunglasses when the sun came out. Interestingly, the same landscape viewed on Google maps was a washed out yellow green from the mix of red brown dirt, green foliage and yellow flowers blended together by the vertical perspective rather than the bands of bright colour we could see through the car windows. View of the Stirling Range across pasture, grains and canola paddocks in 1999 with The White Volvo and camper trailer 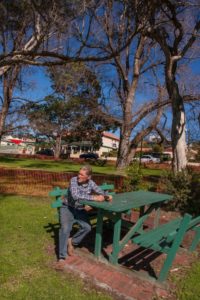 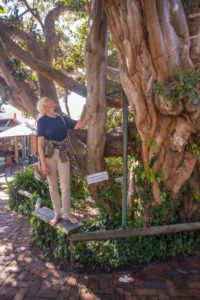 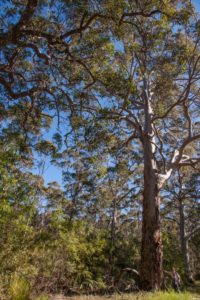 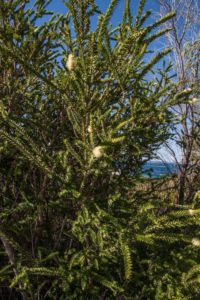 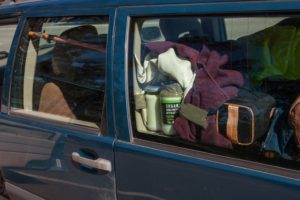 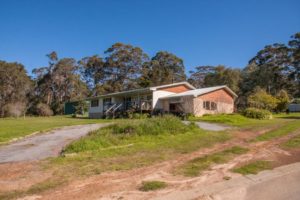 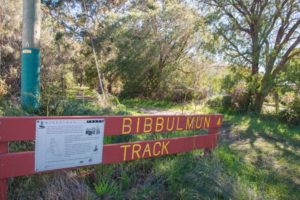 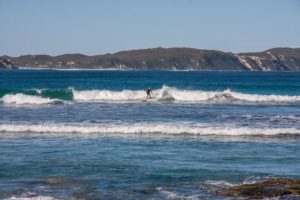 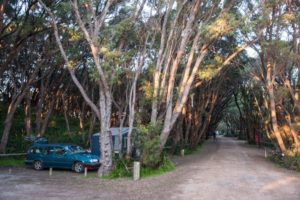 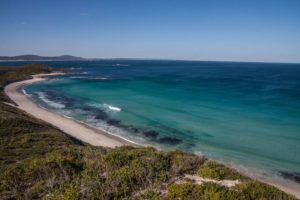 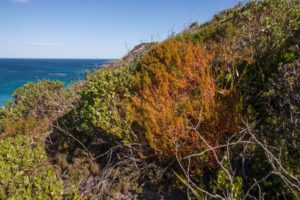 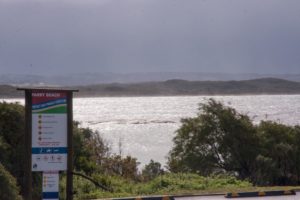