Wednesday was wet all day in Margaret River, with water on the paddocks and streams gushing as one might expect in August. After breakfast with Peter and Jan Lane (and a review of Peter’s latest presentation on WA geology and its relationship to critical conservation concerns), we were taken on a tour of wineries on the Caves Rd by Su’s nephew (and his mother) looking for somewhere to eat lunch. In the process David did sip some Margaret River whites – while Su drank 2019 vintage rainwater. Face to face with some of most upmarket tourism in the country was a bit daunting but by comparison the bush restaurant we found open for lunch was modest.

Our last day at Fair Harvest included participating in an early morning yoga class and a slow pack up in the campground in the sunshine before we said our farewells to Jodie and Do thanking them for a homely time in their family farm/permaculture education centre/nature based camping ground.

The road out of Margaret River led us out past the housing subdivisions sprouting like mushrooms from the green paddocks, through the oversized roundabouts designed to cope with traffic growth of a dubious future and onto the recently bitumened road through the jarrah/marri forest bursting with early spring wildflowers and the scars of cycles of logging, wildfire and fuel reduction burning that left a forest full of wood but very little of it as big majestic trees that characterised the indigenous landscape. After decades of dysfunction, the conflict between industrial extractive forestry and “terra nullius” conservation seems to be hotting up again with neither side of the debate getting out of their entrenched positions. But lets not go there just now or David will be up the soapbox about sustainable forest management AGAIN. 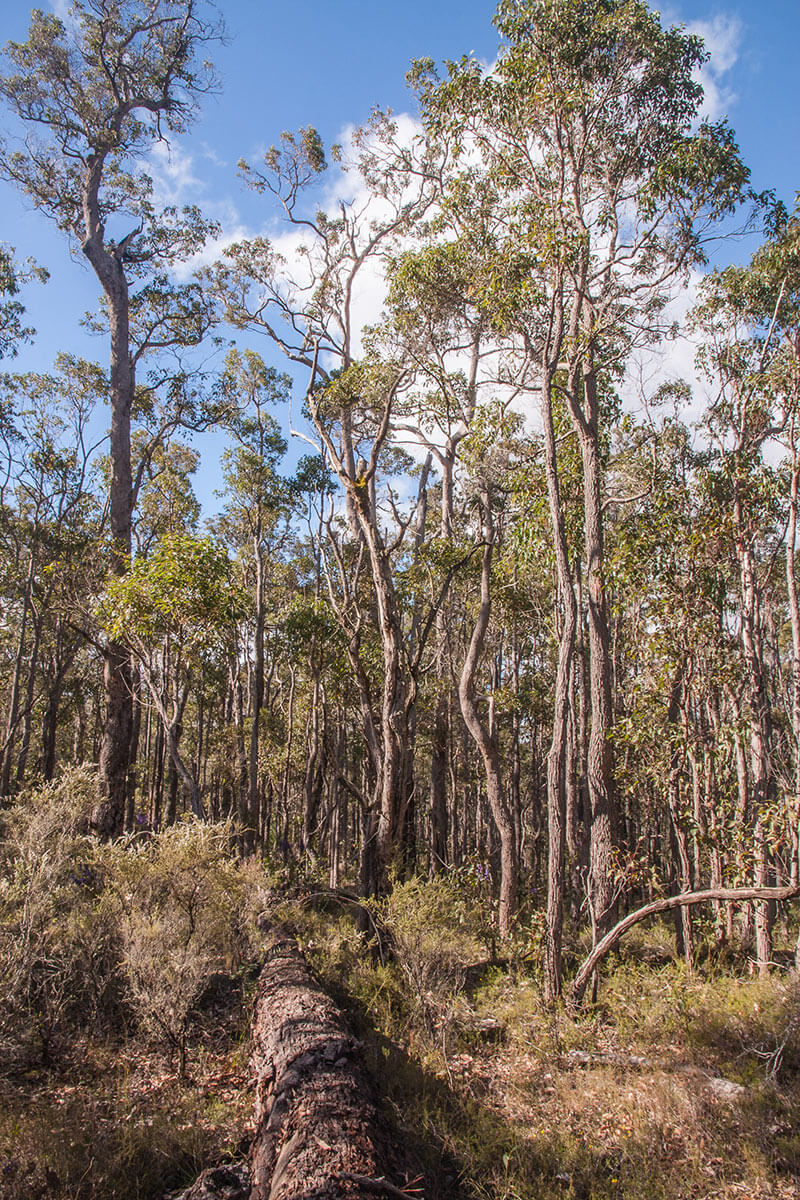 Cut over Jarrah Marri forest on the Margaret River/Nannup Rd

Our destination of Nannup is a small town where one of the last big mills of the South West is juxtaposed by a history of back to the land, tree change retirement and arts and culture tourism. In 1999 and 2016 we had visited permaculture pioneer Jeff Nugent. This time round we had a late booking to present Aussie St at the Nannup Flower and Garden Festival, a four day event with strong community support and funding for name presenters such as Costa, Millie Ross, Steve Wood and Deryn Thorpe (who interviewed David for her “All the Dirt” podcast).

Our hosts during our stay were Bee Winfield and Stew Seesink at the Merri Bee Organic Farmacy, a 27 acre permaculture garden/farm with pigs, chooks, cows. As we drove in we were greeted by curious pigs, cultivated diversity and a sequence of enclosed gardens, trellises and animal system with tidy up under way for an upcoming tour as part of the Festival. The immediate impression reminded us of Johnny’s place at Mt Tomah. A backdrop of huge eastern stated eucs along the public road to the south sheltered tiered gardens and slopes running down to backswamps and alluvial flats of the Blackwood River. Around the house, on the verandahs, and inside there was produce in various stages of storage, preservation and processing. Bee treated us like permaculture royalty, while ex logger Stew warmed to us, as we relaxed into what felt a lot more comfort than we felt in the elite Margaret River vineyards for example. We and two of Bee’s visiting friends from Perth partook the most amazing selection of home grown meat, vegetable, dairy, preserves and homemade bread that met our standards of what is desirable and healthy. Pigs checking us out on arrival at Merri Bee Organic Farmacy

Next day in town we set up the bookstall at the bowling club which allowed Su to avoid the rain and nurse her persistent cough while David toured the festival, took photos of the tulip splendour in the main street, got more reactions being recognised as another gardening guru but was a bit disappointed to crank up a high energy performance of Aussie St for a small crowd of 26. Still, it was an opportunity to acknowledge permaculture pioneer Jeff Nugent and also Bee Winfield as a persistent practitioner of permaculture abundance and diversity. Su hung out at the bookstall and saw interesting presentations about cooking from the garden, using nettles and other subjects that she enjoyed while David headed for the presenters green room behind the town hall to eat and had a catch up with Costa, before being told by the festival co-ordinator that she would drive us to the main marquee for the Q&amp;A with Deryn, and Steve. David thought it was a bit ridiculous (even in the rain) to drive the few hundred metres down the closed off side street but our chaperone was insistent. Then David recalled the last time he walked down the street with Costa who must be the most recognisable – and maybe loved – media personality in the country. It takes forever. Talk about being with royalty. Despite the downpours, a crowd of about 150 filled the marque under the massive trees of the Nannup Forest Arboretum, with questions that reflected an organic radicalism. David took advantage of the opportunity to engage with the other presenters and got rounds of clapping with his rabble rousing words. More effective connection than what we managed with the ticketed Aussie St event. Signature tulip displays in the main street of Nannup with jarrah sculpture of the Nannup tiger, a fugitive relative of the Tasmanian tiger that locals celebrate.

After pack up of the bookstall, including the very wet cockatoo flag, we headed for the Nannup pub as a warm dry place to hang out until the “gardeners mingle” event at the new Nannup Community centre. A country blues band pelting out classic tunes in an undercover outdoor space had us jiving along with other aging boomers. The sound of live music attracted Costa, which disturbed to scene with requests for “selfishes”. In competition with the loud music David directed Costa’s attention to the tree behind us. He looked at sculptured Mirror Bush with hanging baskets before he noticed that the dark green forest tree canopy above us was a massive avocado covered with hundreds, if not thousands of fruit. So much for the horticultural wisdom of our youth that assumed it was too cool in southern Australia to grow “subtropical” fruits. The growing interest in economic botany and tree crop diversity in this region during the 70s and 80s led to trees such as this one, as well as export industries that have colonised the green dairy pastures of the south west with vines, olives, avos and macadamias. In the process they are providing a large slice of the current economy of what had been one of the most economically depressed areas of rural Australia, dependent on timber cutting and dairy cows. Permaculture pioneers such as Jeff Nugent played a key role in triggering that horticultural expansion even if the forms it took under corporate capitalism were not always to the liking of those pioneers. Yes permaculture did make a greater impact that most realise, but that impact was mostly absorbed and turned back into the same old problems. But like the expansion of plantation forestry being mostly monocultural blue gum, the monocultures of vines, avos and other tree crops in the south west will provide more opportunities for novel ecologies that might sustain local communities once the fossil fuelled bubble economies of today are history.

The “gardeners mingle” was the opportunity for festival goers to have eats and drinks with the celebrity gardeners. The food was promoted as all local, prepared by paddock to plate chef Guy Jefferys and his wife. It was almost all carbs and animal protein with token bits of rocket which disappointed us and left David unwilling to eat the breads made from industrial wheat flour from the local hot bread bakery to go with the incredible range of local cheeses and other delectable. We were disappointed (given the hype and the obvious effort and generous donations of ingredients involved) to be missing out on the more simple but still sumptuous food produced and prepared by Bee and Stew. The evening did allow us to connect with Millie Ross from Gardening Australia who lives not far from our home and to participate in a light-hearted panel of garden secrets and funny stories. Back at Merri Bee Organic Farmacy, Stew was doing his stint contributing to Bee’s bread bake for the following day; real bread from Spelt grown and stone ground in a traditional windmill. We were both amazed being with people who had taken the permaculture vision of self-reliance to heart over the decades, created diverse abundance, educated and inspired others but were also dealing with the challenges of changing climate, and aging infrastructure and bodies with no certainties about whether any of the offspring or others would share the work, and in time take the reins.

Saturday morning we up at 6am to have breakfast and say goodbye and thanks to Bee and Stew before their early morning exit. We were very impressed and as May, the fiesty friend from Perth told us about her own journey of counterculture passion. “It’s pretty good to be in your seventies, not taking pills every day and showing up the younger folks who are stressed and unfit”. Sometimes she chooses to rub it in, when she get crap about her mad hippy ideas and way of life. Rage on May! 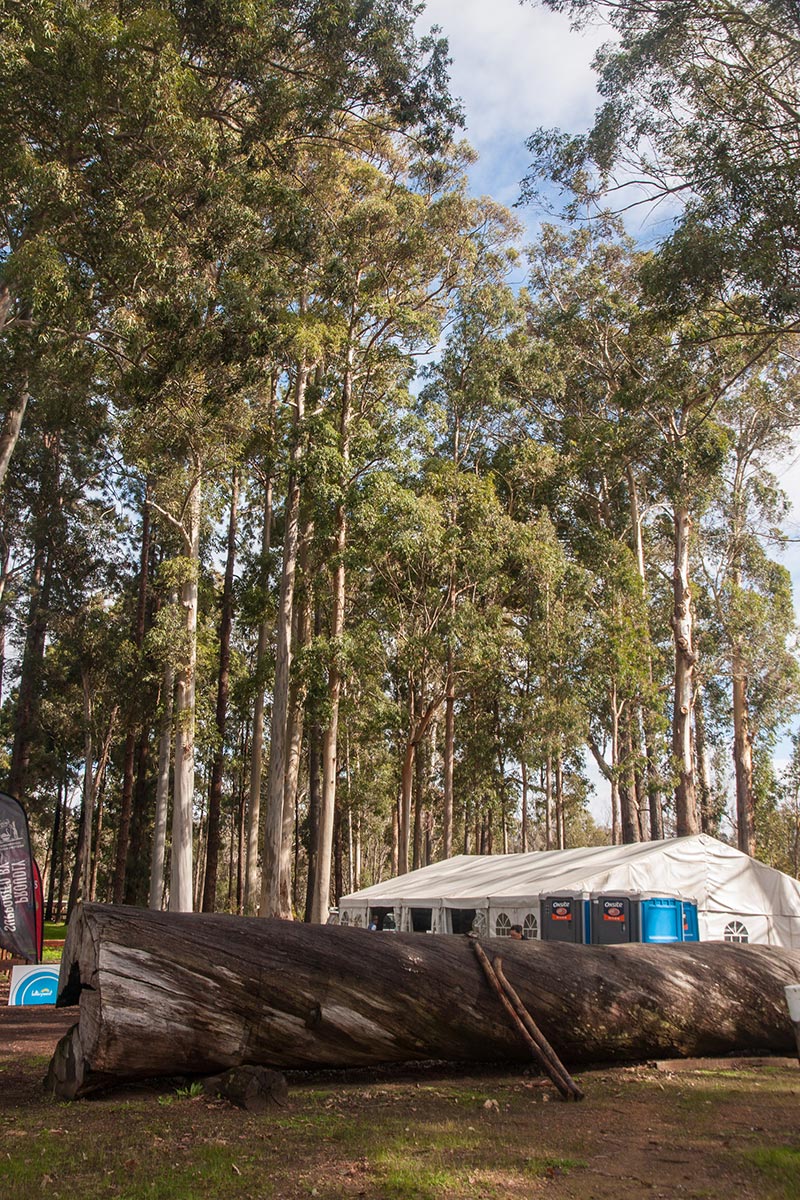