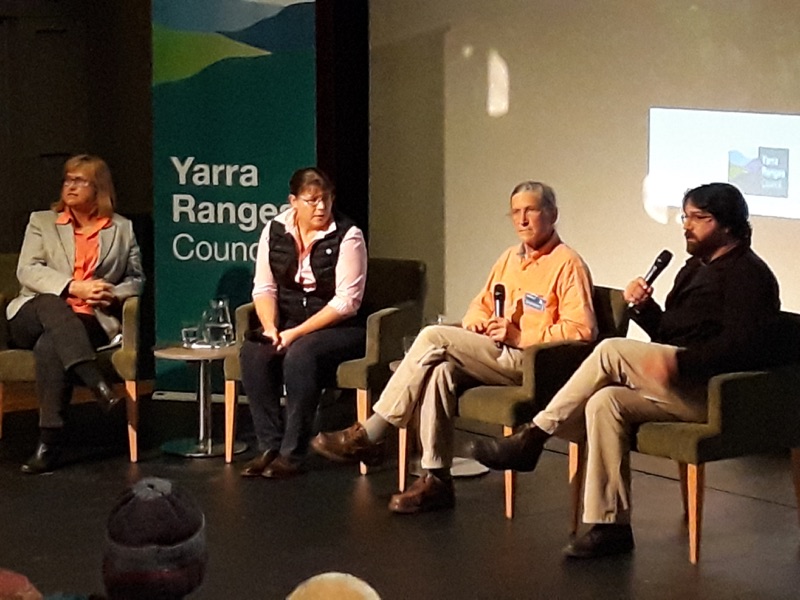 Farmers, landowners and community members heard about how climate change could impact them and how they can prepare to meet the challenges climate changes poses.

He said one of these risks was a downward trend in rainfall and greater volatility in extreme weather which included extreme rainfall events and heatwaves.

Dr Schefe spoke about the benefits of soil carbon and how carbon levels can be increased and maintained on farms.

Permaculture co-originator David Holmgren spoke how his own property in Hepburn was designed to catch urban stormwater to create a highly productive property.

He also spoke about the increased bushfire risk in a changing climate and how whole farm planning can be used to help reduce climate risk and provide environmental benefits.

“Agriculture in Yarra Ranges is already being affected by climate change. It’s important we all explore ways to adapt and mitigate the risks of a changing climate,” Yarra Ranges Mayor Tony Stevenson said.

“Unfortunately, as the climate warms and dries and as extreme weather events become more common, our agricultural production will be at increasing risk.

This event was organised by Yarra Ranges Council with support from a number of local farming organisations, and was hosted by Danni Small from Women in Horticulture Yarra Ranges.

Tony Stevenson encouraged farmers and landholders to join groups such as Farmers for Climate Action and Landcare to support and learn from each other.

Tony Stevenson also highlighted Council’s Ribbons of Green program, which has provided nearly 800,000 plants to local landowners over the past 10 years, and the Environmental Upgrade program.

What risks does climate change pose for local landowners?

What can farmers and landowners do to prepare for climate change?