A History from the Future

History From The Future is a short story set in Central Victoria by David Holmgren, co-originator of the globally influential permaculture concept (and long term resident of central Victoria). It provides a vision of how important the strategies and patterns of RetroSuburbia could be in shaping the future for the better. The story starts in 2017  but the narrator is speaking from a very different world in 2086. This story is based on David Holmgren’s big picture, over-the-horizon Future Scenarios work and is a long way from the practical solutions to living better in the suburbs but is within the active lifetime of children raised in todays suburbs.

Here’s an excerpt from David Holmgren’s

A HISTORY FROM THE FUTURE: a prosperous way down

At the turn of the 21st century the evidence for energy descent driven by peak oil and climate change was already strong. The quasi religious belief in continuous economic growth had a strong hold on collective psychology in central Victoria as much as anywhere in the world. The global financial system began to unravel in 2008 at the same time that global production of conventional oil peaked. For a minority it was increasingly obvious that the policies put in place ensured that the collapse was even more severe when it did come. It was like the powers that be had pushed the accelerator hard to the floor in one of those supercharged sports cars of the time, to attempt to jump across the widening chasm that humanity was facing.

The collapse of global financial growth unfolded differently in different places but here the story had many upsides that were partly due to luck and partly a result of visionaries and innovators who helped create a better future. These are the bare bones of how we got from what a few people still consider was the golden age to what we call the Earth Steward culture.

Choose from a vast array of nothing, or perhaps a different path. Photo Erica Zabowski

In 2017 the Australian property bubble burst. For our communities, this marked the start of the First Energy Descent Crisis (of the 21st century). Ballarat Bank was the first financial institution to fail and a government forced take over by the Commonwealth Bank saw the Community Bank network hived off as local lending co-ops backed by local government hoping to restart economic activity in regional towns that were increasingly on their own as State and Federal governments focused on dealing with hardship and social unrest in the cities.

The crisis was world wide, so dramatically reduced global Greenhouse Gas Emissions and the peak of global oil (what they called Total Liquids at the time) the same year was very much in line with the 1972 Limits To Growth report default scenario showing industrial output peaking about that time. More recent studies suggest that net energy available to support humanity peaked closer to the turn of the millennium but it’s all a moot point because it seems that economic growth had been a net drain on human welfare for decades before that.

As capital investment in oil fell off a cliff, and production from existing fields declined at nearly 10% there was a second oil price shock, a US currency collapse and a short war between the USA and China in 2022. Australia got punished in the trade embargo imposed by China. The economic crisis in China had already caused nearly 100 million of the recently urbanised workers to return to the villages, and reimposition of a command economy to continue the shift to renewable energy and revitalise agriculture. Consequently China was able to cope without Australian coal and gas and there was so much scrap steel in the world that the iron ore exports had come to a standstill.

While oil and food remained costly (at least relative to falling wages) most manufactured goods were dirt-cheap. Solar panels from China (somehow getting around the trade embargo) accelerated the trend for retail customers going off grid which, combined with collapse of commercial demand for electricity, led to a “Death Spiral” in the power grid with rising prices and increasing blackouts (and surges due to excess wind and solar inputs).

A newly elected Federal Labor government renationalised the power grid, along with price controls, rationing an Australia ID card allowing rationed access to subsidised supermarkets that had been experiencing shortages of fresh fruit, vegetables and dairy.

In Victoria, a Liberal government implemented policies to encourage people to be more self-reliant. Permaculture education was adopted as a framework for integrating aspects of self-reliance including home food production, owner building, water harvesting and waste management.

Rationing of fuel led to hitch-hiking, ride sharing and in rural areas a rush to convert vehicles to wood gas. Bicycles became the default personal transport around town in Castlemanine but in Daylesford and Hepburn, electric bikes and vehicles powered by the Hepburn Wind charging stations installed for tourists before the property bubble burst maintained mobility for locals.

Conversion of vehicles to wood gas by a range of bush mechanics and ex-hot rodders had mixed success. The market value of higher powered larger vehicles and trucks rose as a result of the first wave of conversions. The Castlemaine Obtainium Engineering Institute was established to test and improve local designs and prototypes. One of the motivations was a competitive spirit with the electric car networks centred in Daylesford and Ballarat.

Use of Bitcoin (a virtual currency), local currencies, precious metals and barter all increased to support exchange in the rapidly growing informal and grey economies. Bitcoin then failed in mysterious circumstances after being targeted for funding terrorism.

The Internet began functioning again after major breakdowns during the conflict between the US and China. But Facebook and Amazon were bankrupt, cyberspace was littered with defunct and unmaintained sites and Internet marketing was plagued by cyber crime and draconian government regulations. Local computer networks using wireless technology, as well as a revival of two-way radio, started building back to basics communication pathways. 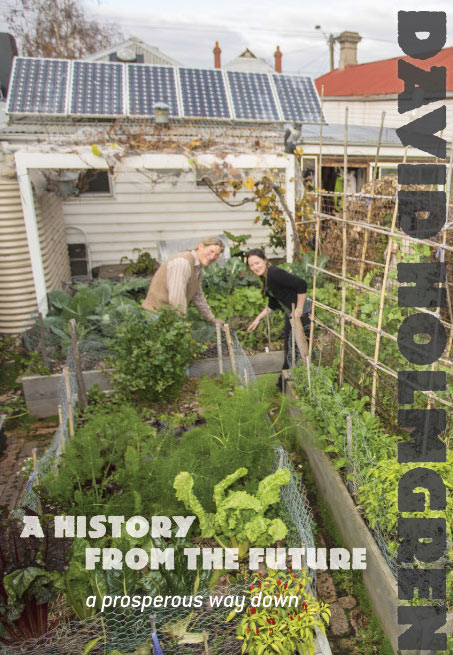